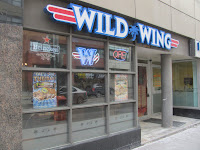 For over a year, I have been passing this store front on King by Bathurst advertising the building of a Wild Wing location. It was one of the slowest construction projects I have ever witnessed. Finally this week it opened and Teena and I stopped in to give it a try.

Wild Wing started in 1999 in Sunderland, Ontario, and now has about 100 locations in Ontario and Alberta.

The decor was a little confusing, though. Their website says "Wild Wing restaurants are dressed up as old time saloons" which for the most part, it is. The Wild Wings logo has palm trees in it and this restaurant also has a large plastic palm tree in the middle of the room 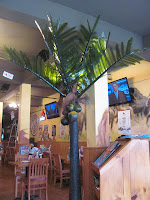 . On the website, cowboys and cows trot underneath a couple of palm trees. Now I have watched hundreds, maybe thousands of westerns and never have I seen a palm tree in any of them.

Being a wing place, though, this is where most of the points need to be scored and they come through with flying colours. Teena and I had to decide whether to get our usual order or, as they have over a hundred different kinds of wings, go for something new and different.

We went for new and different. Teena had Whiskey Girl wings (BBQ sauce with a buttermilk dill drizzle) while I had Mango Chipotle which was a dry rub on breaded wings. They were delicious and big. 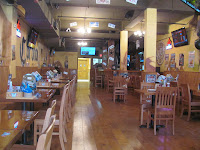 Teena has been known to dip her wings in a dill sauce so the combination worked very well. The breading on mine was not over done and the spice was excellent. The wings were much sweeter than I had expected but once done, there was a nice mild burn on my lips, to me the mark of a great wing. We each got nine wings and they were huge!

Should be interesting to see how this location does as it's on a tough corner. St Louis Wings tried and failed on this corner already. There is a takeout wing place across the street that has been there for a couple of years and right next door is the Wheatsheaf, Toronto's oldest bar and a place famous for their wings.

That being said, if you are a wing fan, you should give Wild Wing a try. We will be back for more. 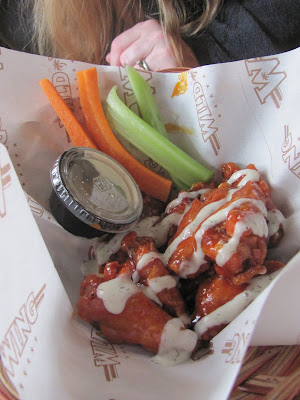 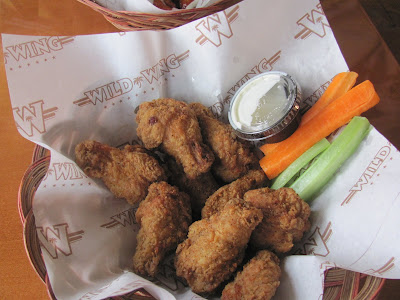