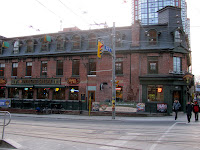 Tonight Teena was out with friends and I had a dilemma. Should I go home, make some pasta and then head out for Aquafit or hit a pub for a couple of beers and some wings.

As you can see from the top picture, the devil on my shoulder won out. I was simply too lazy to cook myself supper. I did walk to the pub and then home which is a 3KM walk (almost 2 miles) so did get some exercise. 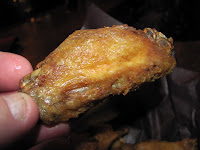 Their selection of beer is not too bad. They have a few of local craft beers, Amsterdam Blonde, Steam Whistle and Mill Street Tankhouse, plus a dozen other beers on tap.

The bar where I enjoy sitting was almost full but I found myself a spot. The rest of the bar was quickly filling up during my stay, either because of the holiday season or Tuesdays being half price wing night. The bartender was friendly and looked after me well. They seemed to have lots of staff to look after the tables. 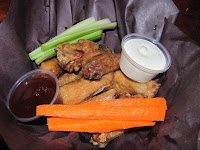 The wings were a good size. I have learned from the Lord of the Wings on how to properly take a picture of a wing.

The part I enjoyed most was finding out that a pound of wings and two 20 oz glasses of Tankhouse came to just $18.50.

The pool can wait for another night. I enjoyed my stop tonight.
Posted by Swordsman at 18:39