Beer of the Week- The Keith's Brewmaster Collection 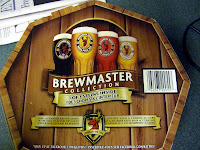 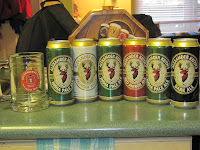 For Christmas I got the Keith's Brewmaster Collection from my nephew Kyle and his wife Kerri.

A nice gift as it gives me a few new beers to try. The pack comes with 3 IPAs, and a White, Amber and Dark, plus a beer stein. I have not had anything but the IPA so this should be interesting.

Alexander Keith came to Canada from Scotland in 1817 when he was only 22. It did not take him long to get something going as it was in 1820 that opened his brewery in Halifax.

The brewery prospered and he became well known and liked in town becoming the Mayor of Halifax three times. Teena and I did a tour of the brewery a few years ago and, if in Halifax it, is really worth taking.

In 1971, the brewery was sold to Labatt's. In 1995, Labbatt's was sold to the Belgium International brewer Interbrew which merged with AmBev in 2004 to form Inbev which became Anheuser-Busch InBev in 2008.

Go to the east coast, though, and Alexander Keith's is still considered one of their own.

Time for some tasting. 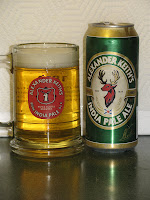 Keith's IPA - This is my "go to" beer in palces that don't have any craft beer on tap. I remember when it first came to Ontario. I was in Ottawa and a big fellow from Cape Breton named Keith saw the Keith's sign and steered me into the pub say, "Now, Gordie boy, I'm going to show you what I grew up on. It was very good." Teena is from down east and it is her beer of choice too.

It pours yellow in colour with a white head, which quickly disappears. The Keith's stein has an etching in the bottom which allows the beer to keep creating bubbles so does not go flat if left too long. Beer is not left "too long" around here.

It has a slight hop aroma and starts a little sweet in taste finishing with a slight hoppy bitterness. The bitterness has stood up in the past when I have had a more bitter beer before it.

It's really not an IPA but a decent big brewery beer. 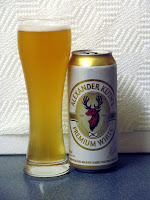 Keith's Premium White - This is the newest product produced by the brewery. It comes unfiltered and is made with citrus and spice. It pours a straw colour with a white head and is cloudy due to it being unfiltered. The head quickly dissipates leaving no lacings on the glass.

It has a surprisingly light mouth feel and is very flavourful. There is not the usual typically strong wheat beer taste or aftertaste to this. The flavour does fall away quickly in the finish.

This is a nice pleasant wheat beer. People who like a light refreshing summer beer but don't like wheat beer would enjoy this. 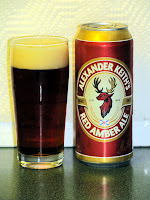 Keith's Red Amber Ale - This beer actually pours brownish in colour with a brownish tinge in the head. The head does remain for a bit.

There is a malty sweetness in the front which carries through to the finish. There is no bitterness in this beer but I found it flavourful and would have it again.

I am not sure if Keith's put this out to compete with Rickard's Red but if they did, they win on taste for sure as I am not too crazy about the Rickards line. If that was not their purpose, it still is a happy win for them. 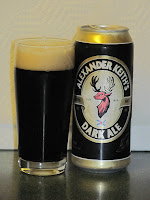 Keith's Dark Ale -I heard rumours that this was first produced as Keith's Stout, which was marketed as a light stout with the slogan "Stout need not be heavy." It was rejected by the public and then relaunched as Keith's Dark Ale. Knowing this, I approach this with caution.

It does not pour black but is extremely dark, maybe a very deep brown.

It has a good brownish head which dissipates much slower than the others, leaving behind some nice lacings. The roasted malt comes through very nicely. There is a slight bitterness which may come from the roasted malt of hops. I am unsure.

The beer is a little watery in mouth feel but overall a very decent beer. I would buy a stout or porter before having this one but sure did enjoy it.

Thanks, Kyle! Thanks, Kerri! I enjoyed it and it was fun. Still have a couple of IPAs left for another day too!

Here is the etching in the bottom of the Keith's mug. I have seen this in other glasses such as Duval it is more to keep the beer lively than for decoration. 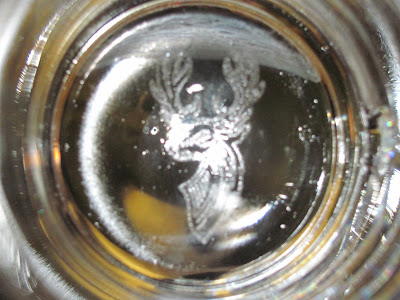