Beer of the Week - Krombacher Pilsner 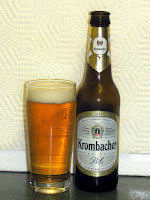 My friend of mine from work, Martin, has been telling me how much he enjoys Krombacher Pilsner. He loves it. It is the only beer he drinks. I have never had one before and thought I should give it a try. I had high expectations for this beer as Germans really know how to make great lagers, pilsners and beer in general.

The brewery was launched in 1803 by Johannes Haas whose father owned a tavern in Krombach. The brewery was relocated to its present location sometime between 1858 and 1882. At the site, the brewery created 2 large caverns in which to lager their beer.

In 1890, the brewery started experimenting with brewing Pilsners. The beer style was still fairly new in the beer world as pilsners weren't created until 1842.

In 1896, the Haas family sold the brewery to Otto Eberhardt who turned it into a corporation in 1905. The brewery has continuously produced beer even during the war years. The town and brewery endured heavy bombing in 1945 but still made a limited amount of beer.

Today Krombacher beer is exported to 48 countries including Canada.

Krombacher Brauerei states that it brews Krombacher Pilsner according to the Reinheitsgebot (pronounced "Rine-Hites-gaBoat") also known as the German Purity Law, so there are no additives. Water, hops, barley malt and yeast are the only ingredients allowed in its beers.

The beer pours a golden colour with a nice white head. The head dissipates fairly rapidly. Loads of lacings line the glass as the head disappears and the beer is sipped. There is a very nice aroma to this beer. I love being able to smell hops in my

The beer starts with a bit of a watery mouth feel but then all the flavour kicks in. A very pleasant low bitterness finishes the beer. I have not been disappointed. This is an excellent pilsner, one that would really make its mark on a hot summer afternoon. It's making its mark with me right now as I sip it and watch my Ti-Cats take on the Montreal Alouettes in the eastern Semi finals.

Thanks, Martin. Excellent recommendation! I think I owe you a beer. Let's make it a Krombacher!