I thought it was a coincidence that when Teena and I did a tour of the Fortress of Louisbourg in October and we got back home I saw in Canada's History Magazine that there was a new book out about James Cook, the world famous explorer. The book was not about his famous adventures exploring the Pacific but his early years in Canada.

The coincidence here is that James Cook took part in the British siege of the Fortress of Louisbourg.

"The skills, knowledge and experience that took Captain James Cook to the South Seas and around the world seemed to come out of nowhere. In fact, as author Jerry Lockett has discovered, their foundation was laid during the time he spent in Atlantic Canada. His experiences on Canada's east coast and the naval men he met there shaped him to become one of the most successful explorers of all time.

Cook arrived in Halifax, Nova Scotia in 1758 as a competent but undistinguished warrant officer in Britain's Royal Navy. Over the next nine years he learned the complex skill of navigation and prepared many detailed maps of the coastline and key harbours. He left nine years later with the skills and reputation that made him an obvious choice to lead a voyage of exploration to the far side of the world. 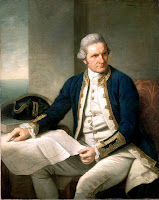 nces as a young man and of the influential men who became his mentors and patrons. He also describes Cook's role in the key British military actions at Louisbourg and Quebec which brought an effective end to the French regime in North America."

I found "Captain James Cook in Atlantic Canada: The adventurer and map maker's formative years" to be a very interesting book about a little known part of his life. He spent nine of his 51 years in Atlantic Canada. He had the luck during his service in the Louisbourg siege and the siege of Quebec to have had some excellent captains who encouraged and mentored him. The first was Captain Simcoe who had an extensive library on board and encouraged Cook to read and learn about mathematics and the stars. There is a Toronto connection here too as Captain Simcoe was the father of Lord Graves Simcoe, founder of Toronto.

As Cook was a surveyor, the book deals with excellent explanations of sailing, dead reckoning, determining position and other background needed to understand what Cook was undertaking. I even learned what the boat speed "knot" refers to and how it was originally calculated. These explanations could have made the book dull but was written in an entertaini

Cook became such a great surveyor that many of his charts were not redone for years. In fact, one of his New Zealand charts was not resurveyed until 1996.

One final note on this part of his life comes from famous Cook biographer J.C. Bealehole, "Nothing he did later exceeded in accomplishment his survey of the southern and western sides of Newfoundland from 1763 to 1767."

Wow ... and he is famous for everything he did after!