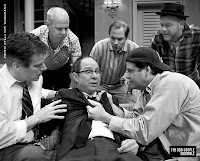 This afternoon Teena and I went to see the Soulpepper production of The Odd Couple by Neil Simon at the Young Centre for the Performing Arts which is in the Distillery District.

I used to enjoy the TV show with Tony Randall and Jack Klugman and loved the movie based on the play with Jack Lemmon and Walter Matthau. I have seen it more than a dozen times and if it was on today would watch it and laugh. I have always wanted to see the stage version and finally got to do that.

Neil Simon's legendary exploration of the relationship between fastidious Felix and his sloppy roommate Oscar is one of the most iconic and enduring pieces of twentieth century American comedy. The pairing of Diego Matamoros' Felix and Albert Schultz's Oscar received rave reviews in 2008, and both will resume their hilarious, tender friendship.

It took a few minutes for my mind to adjust to the characters as I was too accustomed to seeing the more famous versions. Once I got that problem out of my head, a problem not w 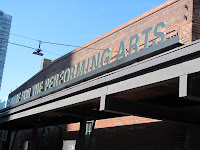 ith the play but with me, then I could sit back and enjoy the show.

The play was very well done and I also enjoyed the set. Overall the performances were quite good although I felt there were lines by both Oscar and Felix that I felt should have been better emphasized for both the humour and to show the characters frustration rather than spoken.

Still, the play was very well done and worth seeing.
Posted by Swordsman at 16:42

Labels: Live Theater, Things to do in Toronto