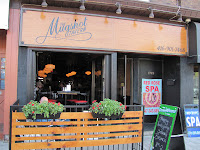 Teena and I had heard a lot of good things about a new place that just opened on Bloor St by Keele called Mugshot Tavern. We ended our walk at that corner so we could have a late lunch there.

They have a good draught selection and an interesting menu. As it was the end of a busy long weekend for the place, they were out of some of the menu items and some of the beer choices. We were more snacky than in need of a meal so we each ordered wings and we split an order of Mac 'N' Cheese Fritters.

I had the Cajun wings which were small but good. Teena had the medium wings. The wings are "baked, fried and then sauteed". Teena found the meat dry. I enjoyed them like that. 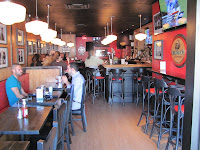 The Mac 'N' Cheese Fritters were a little bland. It could have used a little spice or bacon to jazz it up.

I had not had a King Vienna Lager before and really enjoyed it. I'll have to pick up some for home some time.

Our server, Chantal, did a great job looking after us and had a great personality.

It is called the Mugshot Tavern as the walls are decorated with celebrity mugshot photos. Some of them are from a celebrity's younger days and it was fun trying to name them. Some of them I have posted below.

This is a place I will definitely go back to again when I am in the area. 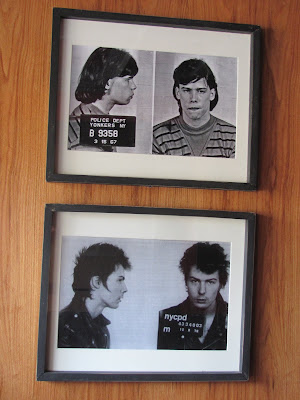 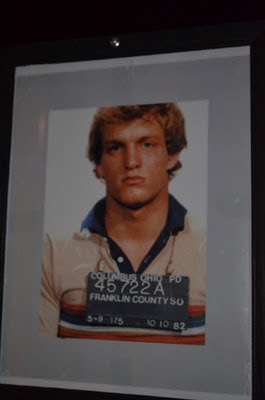