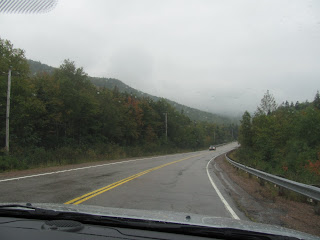 This morning Teena and I left Sydney and headed for the Cabot Trail.

We knew it might be rainy for the drive through the mountains and that I have a fear of heights. Last night Teena gave me the option to back out. We could head straight inland across the island to Inverness or do the trail.

I agreed to do the trail.

"The Cabot Trail, named one of the best road trips in the world by Lonely Planet, is a trail that winds through stunning landscapes, along the Margaree River, a Canadian Heritage Salmon River, and through spectacular rugged highlands of the Cape Breton Highlands National Park of Canada.

The Cabot Trail loops around the northern tip of Cape Breton, Nova Scotia, 185 miles or 298 km long. The trail passes through many charming communities, each with breathtaking scenery and unforgettable hospitality."

The scenery is breathtaking. Because of the rain and fog, we had to pass by a few lookoffs as the fog would be so thick that you could not see anything off them. The weather made the trip a little more exciting than usual as we traveled roads that hugged the side of mountains and had a straight drop-off on the other side of the guard rail. 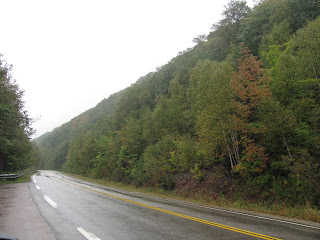 For ultimate scenery, it is recommended to drive counter-clockwise around the trail. I would recommend that if you are nervous about driving along a road that sits on a cliff or have passengers that have a fear of heights that you drive it the other way. Doing the drive as we did from Ingonish to Cheticamp means that 90% of the mountains you drive through will have your vehicle on the outside against the guard rail.

Again it is true rugged beauty. I enjoyed going up Smokey Mountain and driving the long slope down North Mountain, which follows a canyon down with the car being against the mountain. MacKenzie Mountain and French Mountain totally scared me. We would come to a corner that said to do 50km an hour, Teena would be doing 40km and I would be telling her to do 30km. Heights make me irrational and I did not enjoy most of the last 2 mountains ... although I did find the view spectacular.

It is a trip worth taking and I'm glad we did it. Thanks, Teena, for being so very patient with me!

The pictures do not do it justice.

On the way to the trail, we had to cross a short straight across St. Ann's Bay on the Englishtown Ferry. It's a small cable drawn ferry that can carry about a dozen cars. 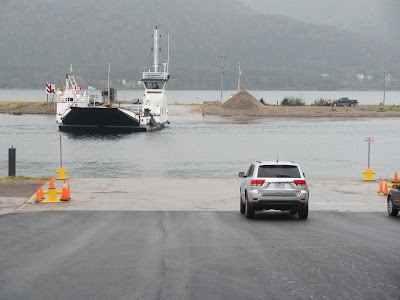 Our first stop was the lookout at the top of Smokey Mountain. After this shot, the fog you see at the bottom hiding the ocean rolled in over us. It was so cool to see the wall of fog climbing the hill and enveloping us in less than a minute. You will notice in the picture of us at that same spot, fog replaces the scenery. 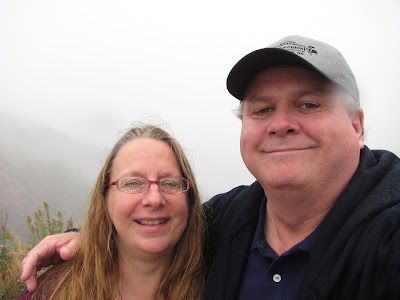 Some pictures of the drive along the east coast. 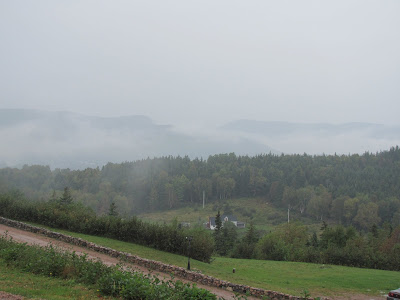 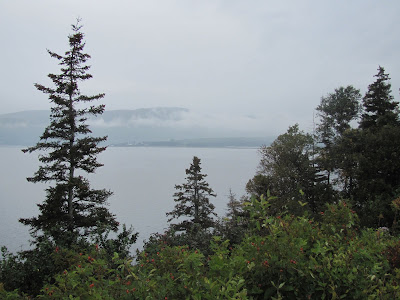 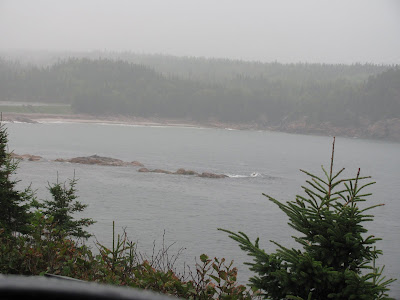 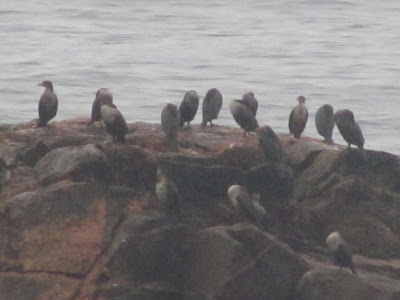 When we hit Ingonish, we stopped for a break at the Keltic Lodge on a scenic point on the Atlantic, then about 5 minutes up the road we had a great lunch at Coastal Waters Restaurant whose Coastal Ringer burger will be featured on a new Food Network TV show. 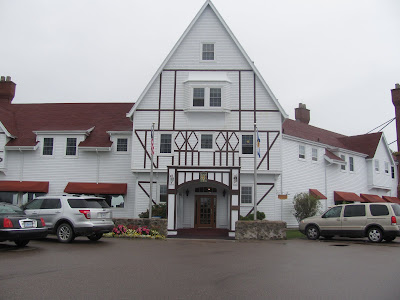 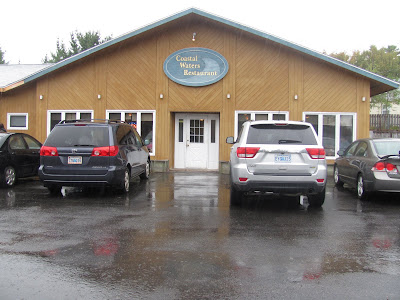 North Mountain was a spectacular drive down the canyon road around dozens of corners. Would have been even more beautiful without the fog. 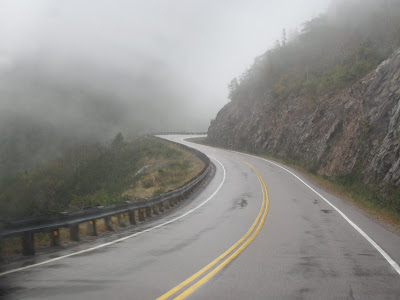 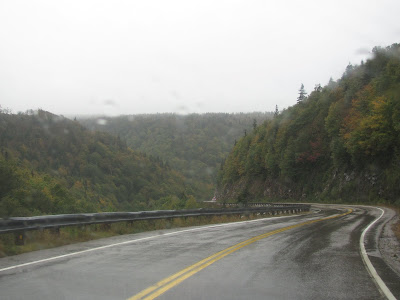 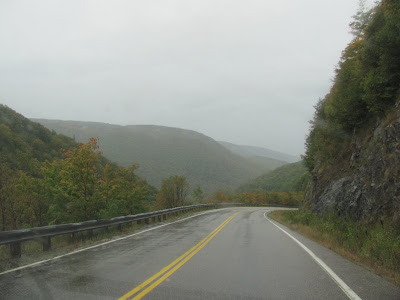 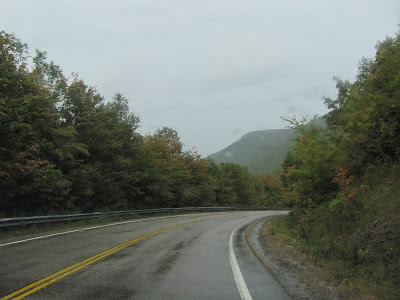 The view off MacKenzie Mountain. 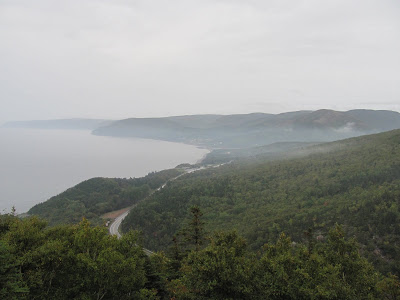 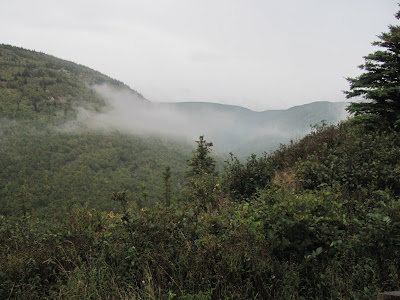 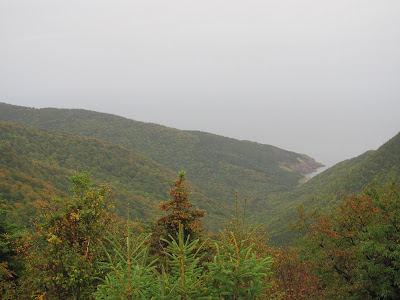 The view from French Mountain. I found this part of the drive the most scary. I only took 3 pictures as the rest of the time I was staring back and forth between the guardrail and Teena's speedometer. Although she was way below the speed limit, I preferred slower although the people behind us may have wanted faster. 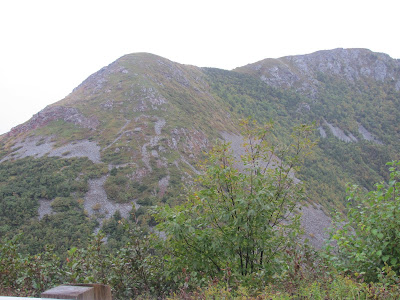 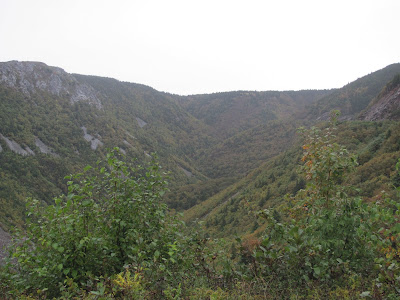 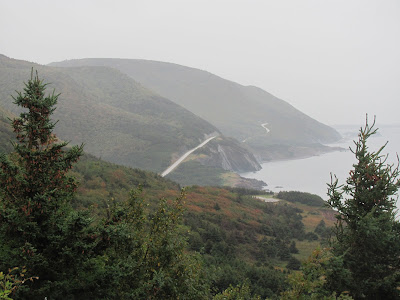 Finally back on flat land. This is a beautiful trip that is definitely worth taking. 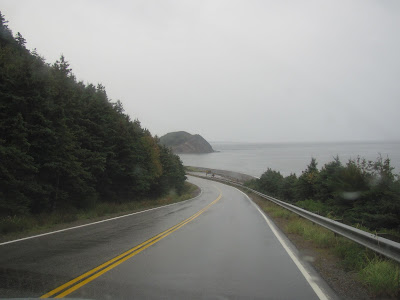