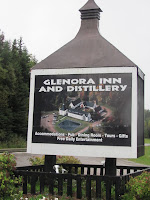 Last night was our last night on Cape Breton Island and we stayed at the The Glenora Inn & Distillery just outside of Inverness. We knew of Glenora as, although they are famous for their single malt whiskey, we love their Smugglers Cove Rum.

Teena's sister, Sarah, and her husband, Joey, stayed there the night too in a room a couple of doors down.

Glenora opened in 1990, not just as a distillery but also as a nine room inn complete with a 50 seat dining room and a pub on the grounds.

When the distillery first opened, they knew it would take eight years before they could bottle and sell their first bottle of whiskey so to 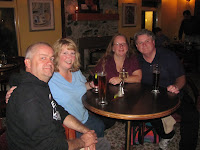 make sure money was coming in, they made rum. Very good rum too!

We were talking to one the distillery workers who told us that now Smugglers Cove is made and bottled in Newfoundland. They do not sell any at their gift shop but do serve it a the bar.

The rooms were not a bad size but our TV did not work. We spent very little time in our room anyway.

The pub is quite nice. Last night there they had two musicians, one on the fiddle and the other on the pia 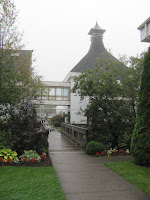 no. They switched places halfway through the night. They were quite good and it was the only time I heard fiddle music on the island.

Sure enough the music stopped at 10pm and they stopped serving. Teena and I were ex 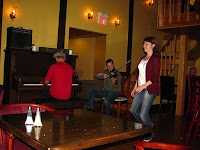 hausted anyway after the long day's drive around the Cabot Trail and were glad to get to our room. Sarah and Joey were also tired after a full day of visiting friends in Sydney, then driving across the island, so they were glad to retire.

Even stranger was when we got to the room we decided we wanted one more drink so I went to grab some ice from the ice machine and found the area locked tight.

Wow! The place locks completely down at 10pm on a Saturday night!

The next morning we slept in a little then headed off for a 4.5 hour trip to the airport.

I found the Glenora Inn scenic, the food good, the draught excellent and the music excellent. The rooms were a little expensive and the closing time rules very strange. It was good to give the place a try. I don't believe there are many other places to stay in the area.

We pulled in just as night was falling and the next morning fog greeted us. 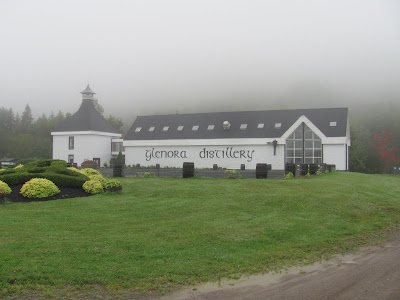 If it had of been a nice day, this is what we would have seen. 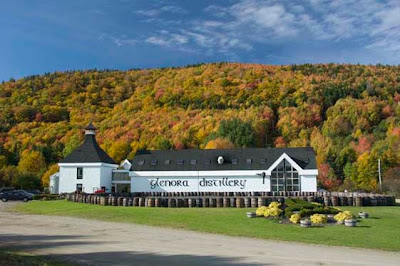 Good thing we didn't stay in one of the chalets on the hill ... we'd have been lost in the fog!