"A Dangerous Method" Gala at the TIFF

Teena was given 2 tickets by the company she works for to the Gala premier of A Dangerous Method. The film was directed by David Cronenberg and starred Michael Fassbender, Keira Knightley and Viggo Mortensen.

The night included drinks and h'orderves before the show. There was wine, drinks and food a plenty. My favorite h'orderve was a duck confit mini taco, fabulous taste with some heat at the end. I must admit I was a bit of a pig with this one. Chicken burger sliders were my next favorite. I wish I knew what spices they used in that as it was great. The first h'orderve we started with when we entered, a Thai mango spring roll, was my third favorite. 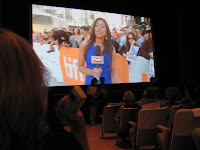 We all got a cold bottle of water and a bag of fresh popped popcorn when it was time to head to the show.

Our seats were great. very close to the stage.

Before the movie started, David Cronenberg came out to introduce the cast. It was interesting that after Keira Knightley, who was the last one introduced, came out she just made it to the line with the others, 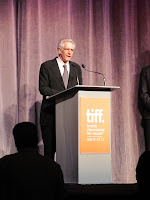 when Cronenberg said thanks and they all left. She barely had time to stop. So I ended up with a photo of her and not the whole cast.

Then came the movie.

"Set in Vienna in the early 1900s, A Dangerous Method touches on the complex relationship between novice psychoanalyst Carl Jung (Michael Fassbender) and his mentor Sigmund Freud (Mortensen).

Studying the methods of Freud, Jung also develops his own theories based on the clinical study of psychologically disturbe 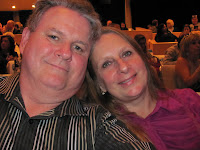 d patients. But when an educated but sick young Russian woman arrives at the clinic, he becomes fascinated by her case and spellbound by her dangerous sexuality. Sabina Spielrein (Knightley) stirs unconscious emotions within Jung, as he begins to probe her dark past."

This is where the night went downhill. The movie starts of interestingly enough as Sabina is shown arriving to the clinic in the country in a state o 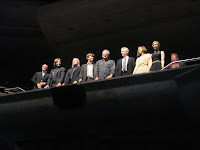 f emotional panic. After the first 10 minutes, the movie becomes a bore.

The movie explores the differences in psychiatric ideas and dispute between Freud and Jung and the relationship between Sabina and Jung. I found the film very tedious.

It is set to open in November and is not a movie I would watch again. I sure appreciated the rest of the evening, though!
Posted by Swordsman at 20:15