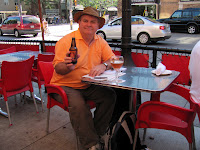 Today was a beautiful day, a great day for stopping to read and have a beer during my walk home from work.

Last time I was at the Bier Markt, I saw that they had on tap a beer that I have never tried from a Californian brewery that I had not heard of before, Indica IPA from Lost Coast Brewery in Eureka, California.

I did some research into the brewery last night before heading out today evening ("prevning" if you are a Big Bang Theory fan) and give the beer a try.

In 1986, Barbara Groom, a pharmacist, and Wendy Pound, a family counsellor, decided to start their own brewery. They spent 4 years planning, trying different brews and heading over to England and Wales to learn about brewing there. Feeling they were ready to open their own brewery and café, they purchased a Queen Anne architecture styled building built in 1885 f 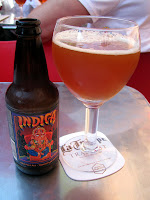 rom The Fraternal Order of the Knights of Pythias, known as the Pythian Castle.

The Fraternal Order of the Knights of Pythias is an international secret fraternal order. It was established in 1864 and was the first fraternal order to be chartered by an Act of Congress in the US. "The Fraternal Order of Knights of Pythias" and its members are dedicated to the cause of universal peace. Pythians are pledged to the promotion of understanding among men of good will as the surest means of attaining Universal Peace"

Not the usual history of a building housing a brewery!

In July of 1990, Lost Coast Brewery opened their doors with Barbara being the Head Brewer. The website says "While embracing the rich tradition of English-style ales, Master Brewer Barbara Groom has added a distinctive West Coast flavour to her ales by brewing with Western Plains barley and wheat and the exceptionally clean water of Humboldt County."

In 2005, the brewery expanded to another larger location. 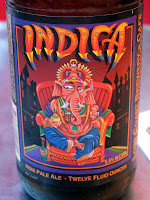 Indica IPA comes in at 6.5% ABV. At the Bier Markt, it is $9.07 for a 355 ml bottle. As it is unfiltered, the beer is cloudy after being poured into a glass. Maybe it is because of the cloudiness but I would describe this as being butterscotch in colour. This is one of the few times I have ever used "butterscotch" as a term to describe colour but it fits.

I sensed a little floral aroma but not much. I was outside with a breeze so a fuller aroma may have been there.

From the colour, I expected a heavier mouth feel which was not there. The beer starts with a little bitterness then the hops take over. This is not an American IPA but an excellent IPA with a long bitter finish which stays with you.

I really enjoyed this beer and would love to sit down and have a few in an evening. The 6.5% ABV would definitely make it a shorter evening, though. I wish I could by this to bring home as it would make a wonderful addition to my fridge.