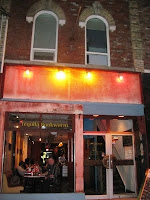 Tonight after seeing A Dangerous Method at the TIFF, Teena and I headed to a pub I had heard about called Tequila Bookworm. Teena reminded me that we had been at this pub before although it was 6 or 7 years ago.

The reason I wanted to go was that I had heard that they had a great selection of craft beers on tap. I was not disappointed. I started with a Beau's Harvest Ale, which was fabulous and ended with a Spearhead Hawaiian Pale Ale, a beer which I will write about one day. 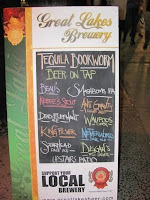 We both were hungry, so we both ordered burger and fries. The food was so good, I forgot to take a picture 'til the end.

The service was a little slow, mainly as on a Saturday night they had just the bartender doing everything. There is a second floor to Tequila Bookworm and I saw him run upstairs a couple of times. The men's washroom was a mess too. 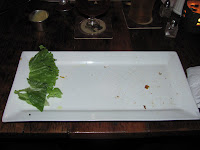 I like the place, though. The bartender, although busy, was friendly and I like the setup. Teena and I had a great table by the open rolled up door. Next time I plan to explore the upstairs.

Yes, I liked it enough to return and will likely hit there on a Friday night on the way home from work to read and have a couple of delicious pints.
Posted by Swordsman at 22:52

Definitely worth it for the beers.