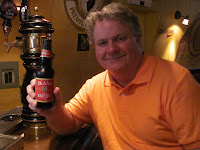 Tonight Teena and I ate downstairs at the Governor's Pub and Eatery and afterwards headed upstairs to the pub.

Along with some Nova Scotia craft brews, they also had bottles of Oland Export Ale from Oland Brewery. Being one of Nova Scotia's oldest beers, I had to give it a try.

Even though Oland Brewery is now owned by Labatts, which is owned by InBev, one feels that the brewery is pure Nova Scotian.

In 1867, John Oland and his wife, Susannah started a brewery using Susannah's p 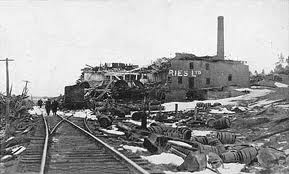 opular beer recipe. Three years later when John was killed in a horse accident, Susannah took over the company with her three sons. Susannah died in 1886 and the brewery was taken over by two of her sons Conrad and George. I do not know what happened to the third son.

Originally the brewery was in Dartmouth but, in 1905, they moved across the harbour to Agricola Street in Halifax and renamed the company Oland and Son Limited.

Disaster struck in 1917 when the brewery was destroyed in the Halifax explosion in 1917, killing Conrad and 11 employees. It was the largest man-made explosion ever before the atomic bomb and leveled much of Halifax. 2000 people died and 10,000 were injured in the blast. 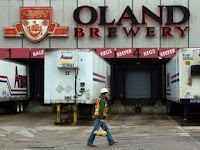 It took a year to rebuild the brewery.

In 1920, they created Oland Export Ale, named as such as they felt the beer was good enough to be exported anywhere in the world. It became a very popular beer in the Maritimes. I like their old slogan, "Good times, great friends, and Oland Export Ale."

In 1971, the brewery sold out to Labatts and the name changed from Oland and Son to Oland Breweries under the Labatt umbrella. In 1995, Labatts was bought by the Belgium multinational brewery InBev. 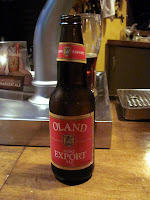 Oland export is still brewed in the original brewery who is a large employer in the area with over 350 employees and still is a very popular beer in Eastern Canada.

Now I get to try my first one! It is popular as I saw many of them being sold.

It tastes much like a big brewery beer but I will say it is slightly more hoppy than a big brewery lager. Definitely not a great beer, it would be a "go to" beer anywhere that there was not a craft beer on tap.

It was my beer of choice 'til I moved to Toronto.

Wow! A 47 year old beer bottle found likely where it was originally drank and set down