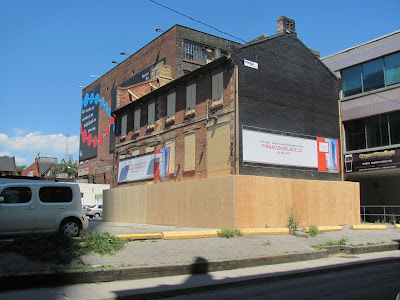 Until a week ago, this building at 106 John Street sat on the southwest corner of John and Adelaide, just behind the TIFF Bell Lightbox building. As with everywhere else in Toronto, condos are to be built on this site. 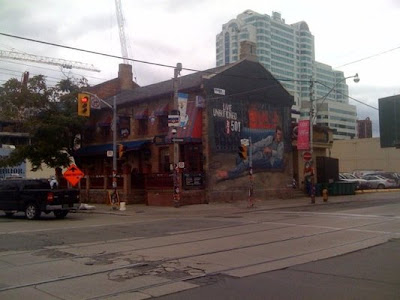 The building was for many years a Fox and Fiddle pub. It was a place that I have never hoisted a pint. Before that, it was, in fact. two houses, listed as 104 and 106 John Street. The city would not let the building to be torn down as it was one of the last of the style of homes built in the area back in the era the last third of the 1800s. These places were built in 1870.

According to Historic Toronto ... "In 1870, on the west side of John Street, two homes were built. The house at 114 John Street was occupied by Charles Bender, a piano manufacturer. The residence at 116 John Street was that of Richard West – a contractor. In 1872, when more homes were constructed, the numbers 114 and 116 were changed to 86 and 88 John Street.

In 1890, the houses were again renumbered and they became 104 and 106 John Street, the numbers being retained to this day. These houses were considered substantial residences, their owners possessing excellent incomes. Their neighbour immediately to the south, at 102 John Street, was the Reverent John Barclay of St. Andrew’s Church on King Street.

The two houses, 104 and 106 John St. was a single building building when it was occupied by the “Fox and Fiddle” pub."

Here is a time lapse video of the building being moved across the road. It looks to be pulled by the cable of a large tow truck. It is only a minute long and very cool to watch.


Here it sits today waiting to be relocated south down John by another historic building. I'm not sure which. I wonder if they are paying these parking rates while it sits there! 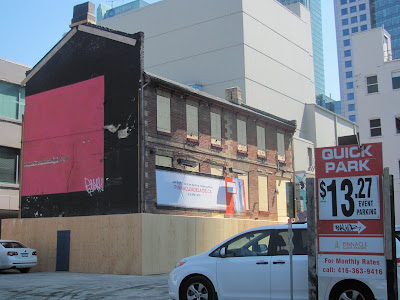 Before the move and with the pubs patio removed 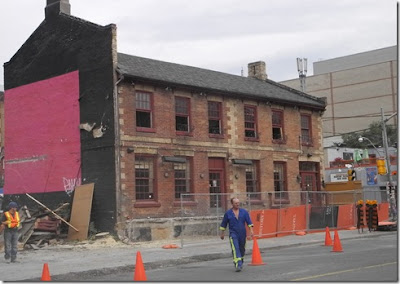 It's too bad it's being moved for condos ... but at least it's being saved.