Beer of the Week - Jupiler Blonde 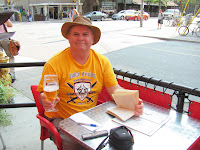 In May of this year, I injured my knee. I ended up with a small tear in my meniscus. The healing process meant that I couldn't walk to and from work. This also meant I didn't stop along the way home on a Friday night to "read" at a pub or patio.

There are no decent places in our 'hood at the end of my ride home. To have a pint or two before my ride meant having to transit in overfull streetcars, so I said to hell with it and gave up my Friday night "read".

Monday Lauren, my physiotherapist, cleared me for walking again so tonight I stopped at patio of the Bier Markt on King W for my "read". This brings me to this week's "Beer of the Week", Jupiler Blonde from Piedboeuf Brewery, the Bier Markt's feature for the summer.

It was a perfect night to hit the patio. I was near the end of my book (review to come tomorrow), it was not too hot, there was a slight breeze and a great spot in the shade. 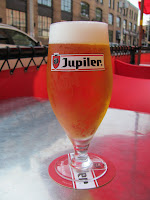 My beer came and I was impressed. The beer was a nice golden colour, with a beautiful white head. As I wrote my notes, the head barely disappeared leaving behind lots of lacings along the inside of the glass. Being a beautiful evening meant that there was a slight breeze which meant I could not get anything from the aroma.

The beer has a bit of a watery mouth feel but quickly the hop character comes through. It is not a bitter beer but the hops are there. I was worried ordering a blonde as usually I find them a little sweet, which I do not enjoy, but this was not sweet and had some hoppiness which I liked.

This is a nice patio beer. A good one for summer. This is a beer I could have a couple of to start, before moving along to a more serious lager or ale. Not to put it down. This is an OK beer.

This posting is backwards to how I usually do my "Beer of the Week" post. I usually research and write about the brewery before trying the beer. Now I am home having tried the beer and then doing my research.

Piedboeuf Brewery was founded in 1853 in Jupille Belgium, which

at the time was know for the purity of its water. In 1920, the brewery was sold to the Van Damme family. By 1987, it was the largest brewery in Belgium.

Today Anheuser-Busch InBev is the largest brewery in the world.