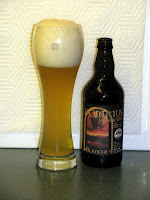 Up for this week is a beer from Microbrasserie Charlevoix in Baie-Saint-Paul, Quebec, a small town on the St Lawrence east of Quebec City. I love it when the LCBO brings in beers from small breweries or micro breweries outside of Ontario.

I could not find out too much about Microbrasserie Charlevoix. I know that it opened in January 1999 and moved to their present location in 2005. Inside the brewpub, there are seats for 75 and they have a huge outdoor patio which seats another 100.

Dominus Vobiscum Blanche is a wheat beer (Witbier). On the bottle it says that it won Gold in 2010 at the Canadian Beer awards and goes on to say "Our Blanche is a sunny straw yellow brew veiled by its wheat proteins w 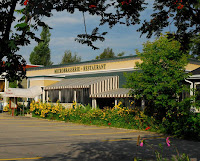 hich impart a refreshing tartness itself complimented by notes of citrus fruit and chamomile. No doubt this Belgium-style witbier is the quencher 'par excellence.'"

It does pour a cloudy straw yellow colour with a very lively white head which puffs up over the top of the rim of the glass like a snow cone. It is very fragrant and I can really sense banana in the aroma.

This is a ver 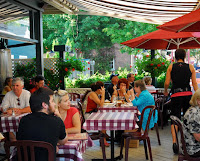 y nice refreshing wheat beer. It has a much lighter mouth feel than I expected. From the aroma, I expected banana to dominate the taste but instead it has citrus tones as described on the bottle. It is a very wonderful wheat beer which would stand up to any wheat beer I have had in the past.

I might never get to Baie-Saint-Paul, Quebec, but if I do, I hope it's summer and I can sit out sampling some of their other beers on a nice sunny day on the patio at Microbrasserie Charlevoix.