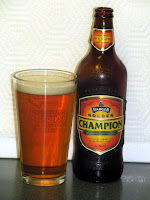 I have mentioned before how I enjoy tasting and writing about beers from old breweries. This week is no exception.

Badger Golden Champion Ale comes from Hall and Woodhouse, an independent, family owned brewery located in Dorset England, which has been brewing beers since 1777.

Since Charles Hall started brewing beer 234 years ago, the company has brewed beer through the Napoleonic war, the Boer war, and two world wars. In fact, it was in 1779, during the war with Napoleon, that the company caught their stride as they received a contract to supply the troops in Weymouth. They have brewed beer under seven kings and two queens and I love how their website breaks up their history under each monarch. 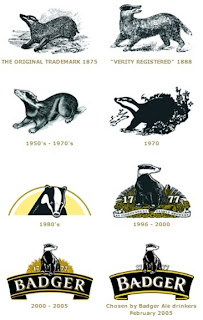 very fond of his sister's daughter, Hannah. When Robert's father, Charles, passed away in 1827, Robert became sole owner of the brewery.

In 1838, Edward Woodhouse left school and started working for the brewery where he met Hannah. Robert was also very fond of Edward and, when Edward married Hannah in 1847, Robert gave the couple a partnership in the brewery as a wedding present and the brewery became Hall and Woodhouse brewery.

The Badger trademark was registered in 1875 making it one of the oldest trademarks on record. To the right are the eight logos used since then of the Badger logo.

The company now owns a series of inns and pubs and still today are an independent privately owned fifth generation family operation. To last that long, the beer should be quite good. I am looking forward to cracking the cap.

Badger Golden Champion Ale uses an extra ingredient in its brew, elderflower (below to the right) which, when you read about it, has many healing properties. It makes this a very healthy beer then! 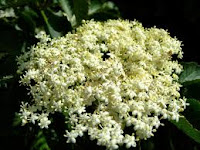 g character of our award-winning golden ale is distinguished by its subtle elderflower aroma, reminiscent of a summer's evening."

Hmmm, let's see if it does. Time to give it a try.

The beer pours a deep amber colour with a white head. There is a element in the aroma which I cannot put my finger on and must be the elderflower. Different but not a summer's evening.

The beer is slightly hopped and the slight flavour of what must be the elderflower is present. At first, this is what I taste before the bitterness of the hops come through. There is a lon 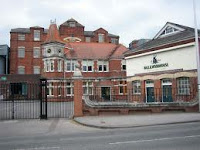 g finish which the slight bitterness of the hops and taste of the elder flower is evident. I enjoyed the beer to start but as the glass became emptier, I found I was not really enjoying it. Originally I thought this would be an enjoyable beer to have just one or two of but I really began to find the taste of the elderflower annoying.

Golden Champion would not make a good session ale but is nice to try for something different. It is not a beer for me but is definitely worth a try if you are looking for something just a little different.