Historic Plaque of Ontario- The Second Invasion of York 1813 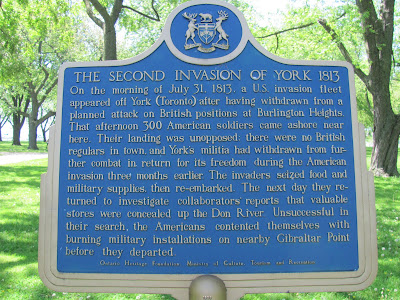 At the foot of Strachan Ave and Lakeshore Blvd is a nice park on Lake Ontario called Coronation Park. Here in 1813, American forces, who had invaded earlier in the year in a bloody conflict, decided to land and invade again. Coronation park was the landing point for this uncontested invasion.

The plaque reads: "On the morning of July 13, 1813, a U.S. invasion fleet appeared off York (Toronto) after having withdrawn from a planned attack on British positions at Burlington Heights. That afternoon 300 American soldiers came ashore near here. Their landing was unopposed: there were no British regulars in town, and York's militia had withdrawn from further combat in return for its freedom during the American invasion three months earlier. The invaders seized food and military supplies, then re-embarked. The next day they returned to investigate collaborators' reports that valuable stores were concealed up the Don River. Unsuccessful in their search, the Americans contented themselves with burning military installations on nearby Gibraltar Point before they departed." 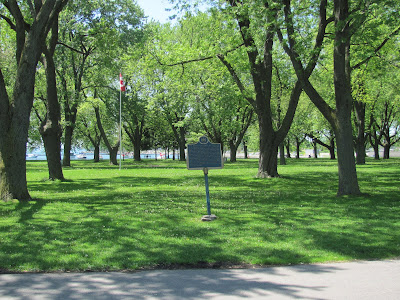