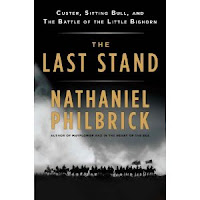 "Philbrick here takes on an oft-told tale, replete with its dashing, flawed main character, its historically doomed, noble Native chief, and a battlefield strewn with American corpses. National Book Award-winner Philbrick writes a lively narrative that brushes away the cobwebs of mythology to reveal the context and realities of Custer's unexpected 1876 defeat at the hands of his Indian enemies under Sitting Bull, and the character of each leader. Philbrick offers a rounded history of one of the worst defeats in American military history, a story enhanced by his minute examination of the battle's terrain and interviews with descendants in both camps"
I found The Last Stand to be an excellent read. I went into the book really knowing very little of the Battle of Little Bighorn except that Custer and every troop under him were killed in the battle. I had no idea that there were also other battles raging around the Little Bighorn camp. The prospective comes form all views, with a deserved sympathy toward the Indian nation. After all, the U.S. declared war on them and never told them. Sitting Bull said if Custer had of approached the camp to talk, they would have talked. Instead they found the camp and attacked without provocation. Custer's defeat was always called a massacre. Seems that Indian victories were always called that and U.S. victory's were not.
In reading this book, the reader will find the American troops brutal in treatment of Indian prisoners woman and children. When the U.S. won a victory against the Indians, they did their best to make it a massacre too. As the book says, not only was this the last stand for Custer but also for Sitting Bull and his people. This is a well-written book and I highly recommend it. On a side note, I read this book on my Kobo. I found that maps, so vital to a book like this, does not come out well on an ereader. They cannot be expanded in size and it is near impossible to flip back to them as reference while you read. It is the only complaint I have about my Kobo so far.
Posted by Swordsman at 17:02