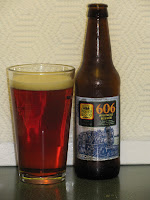 A couple of months ago, I remarked to Teena that I have had beers from every province but three ... Newfoundland, P.E.I and Saskatchewan.

A co-worker of hers, Dorothy, had a business trip to Saskatchewan and brought me back some Stubblejumper Pilsener. It was so nice of her and the beer was excellent.

A few weeks later I was at the Beer Store and, lo and behold, there sat six-packs of another Saskatchewan brewery, Paddock Wood IPA. I just have to give this one a try.

I went online and tried to research the brewery to get their story. Not much really out there but here is what I managed to piece together. 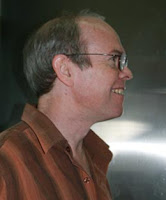 Paddock Wood Brewery is Saskatchewan's first and only microbrewery and is located in Saskatoon. The province has some brewpubs but no microbrewery except for this one.

Steve Cavan (to the right) worked as a professor of classics at the University of Saskatchewan. He enjoyed making beer but could not get the proper ingredients to make good-tasting beer so he set up his own company in 1996, not as a microbrewery but as a mail-order homebrew supplier. Later on he turned the operation into a microbrewery and still operates as a homebrew supply company which sells home brew supplies and complete beer kits.

I went back through different news articles and such and the best read I can get as to when he started brewing had to be at least before 2009. I found a news article from February 2009 about the brewery. I figure though they had to be brewing in at least 2007 as "606 India Pale Ale" was awarded the "best label" that year by the Collectors of Canadian Brewery Advertising. If you're not brewing beer, you wouldn't have a label. 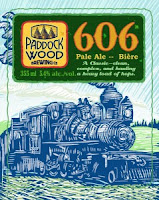 notes on the "606" from the company site: "Featuring a blend of Cascade, Amarillo and Willamette hops on top of a solid malt base. The finish is balanced with rich aromatic hop profile. The ale yeast used in "606 IPA" comes from an old British brewery."

It pours brown in colour with a slight brownish head.

It starts a somewhat sweet and malty then the hops start to come through and stay right through a enjoyably long finish. This is a very nice beer. Not an overpowering hoppy beer but a good beer. It would make an excellent session ale for sure.

This is a beer I would buy again.