A Suitcase Full of Beer! 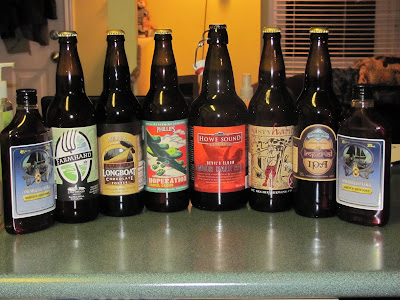 Each year Teena and her sister Sarah go away somewhere together for the May 24 weekend. Sarah lives in Halifax and Teena is in Toronto so they don't get too many chances to get together.

This year they went to Whistler and Vancouver in BC. When Teena came back, in her suitcase for me she had a teeshirt a shot glass ... and beer!

New beer from breweries I have had beer from before and beer from previously unexplored breweries. The suitcase was full and heavy and Teena needed to remove a jacket and a bag to stay under the weight restrictions for the flight home or it would have cost her an extr $75!

Six bottles in all and all are large 650ml bottles except for the Howe Sound Devils Elbow IPA which is a big ole litre!

And I'll write about all of them.

You may wonder what is on each end of row of beer. Rum!

Well traveled rum too. You see, Sarah knows that Teena and I love Smugglers Cove rum from Nova Scotia and only available in Nova Scotia. So the two mickeys (or "pints" as this size is known there, something that is constantly under discussion between Teena and I) traveled from Halifax, Nova Scotia, to Vancouver, took a drive to Whistler, back to Vancouver, and flew back to Toronto, where it is currently being enjoyed.

Thanks, Teena! Thanks. Sarah!