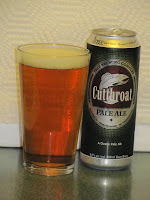 Teena was out in Kelowna BC a few weeks ago and brought me back one of their local beers, Cut Throat Pale Ale by Tree Brewing which is located in downtown Kelowna.

I have written about Tree Brewing before when I gave their Thirsty Beaver Amber Ale a favorable review. It was a sweeter beer than I expected and now I get to try something hoppy from them. On their website, Tree describes their Cut Throat Pale Ale as a West Coast Pale Ale made with hops and five different malts.

The beer pours a light copper colour which, as the picture shows, you can see through. As the head melts away, it leaves behind those lacings which I love to see. It shows that the beer is made with good malt with no additives. I can detect some hop notes when I take a whiff. 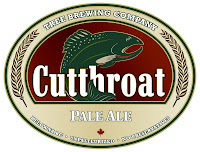 It starts off with a slightly bitter hop bite which grows a little more through the finish. It is a good beer, not a great beer and, like the Thirsty Beaver, would make a good session ale. It is not, I would say, a West Coast Pale Ale. If it was, it would be far more hoppier.

After having two of their beers, I would say Tree does a good enough job that I would enjoy trying one of their hoppier products, like their Hop Head or Hop Head Double IPA.
Posted by Swordsman at 15:00