The Swords of Gord

This week I bought my first epee, which means that now I own all three weapons in the sport of fencing.

I will be fencing in an epee tournament for the first time on May 15th and harbour no lofty expectations for my finish. I thought that for those of you unfamiliar with the sport of fencing, I would do a short show and tell of my weapons and how they are used in a bout.

This is a 1907 bayonet which I received many years ago from my Uncle Roy who was with the Scottish Highlanders. I believe it may be ceremonial only but have no way of confirming. It is the only thing from him that I have. 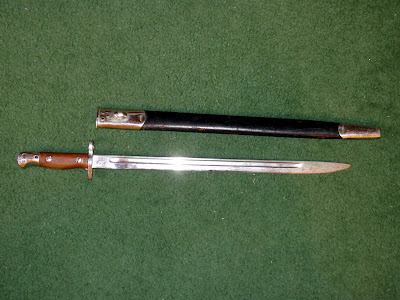 The Sabre: Pictured below is the sabre which I use only in competitions. I have another I use for practice. I have found if I use the same blade for practice and competition, it becomes weak and can break during a bout, which is maddening.

In sabre, the bout goes to 5 points. As it is fashioned after Calvary officers on horseback, the target area is everything above the waist. Points are scored by slashing or poking. There are rules as to who has established an attack, and who is defending and is the fastest and most dynamic of the fencing disciplines. I fell in love with this weapon the first time I held it in my hand. 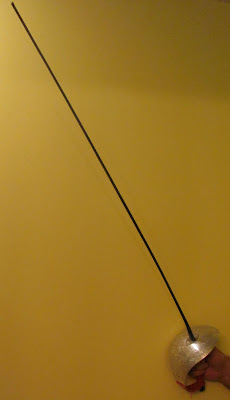 The Foil: Many times I would be at a tournament and fence in the open age group in the morning, have a long wait and fence in the Veterans division in the afternoon. In the middle would be a Veteran foil match which I would watch my friends fence in. Then I thought, why not join in myself, so I went and bought my own foil. I am basically unpractised and did not finish well in the 3 veteran tournaments I have fenced in but have fun. It is funny that last summer I was in a team tournament with strong team mates and rode their coattails to a sliver medal. I can now brag I have medaled in 2 weapons!

In foil, the bout is to 5 points or 3 minutes. If the score is tied, there is overtime. It is a poking weapon with the chest being the target. Point control is very important. Again the judge will rule on who has established an attack and who is defending. It's not that complicated in many cases as if I am backing my opponent down a strip, I have established the attack. The Epee: As you see, my epee is shining and new. In a week's time, there will be some scrapes and scratches. I am looking very forward to getting this into action. One reason is with this weapon the entire body is target. The bout goes to 5 or ends after 3 minutes have elapsed. Again if the scored is tied, there is an overtime session.

There are no rules as who has priority in an attack. If your light goes on after a strike, you get the point. If both lights go on because you both hit each other within 4/100ths of a second, you both get the point. 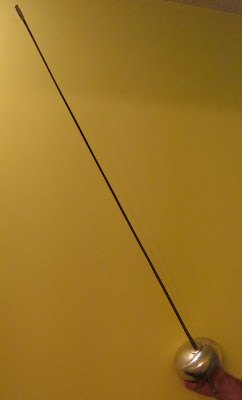 Next weekend in Kingston is the first ever Can/Am cup. There are 133 people entered with participants coming in from the U.S. and as far away as B.C. Some will fence only in their own weapon but there is a Master at Arms trophy presented to the individual who does the best in all three weapons, Sabre, Foil and Epee.

Guess why I bought an epee? I hope to win or have a high standing in sabre. Should be interesting to see how I do in the other two. 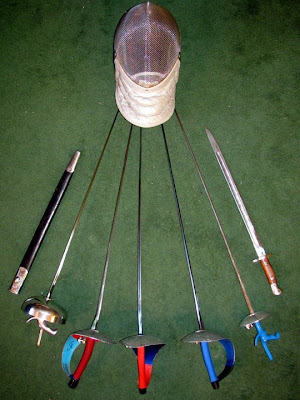