At The Jays Game With Ken 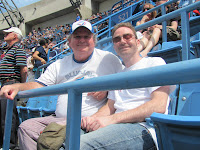 Today Ken came in from Hamilton and we hit the Jays game together.

It was his first game of the year and my third. The seats were in the 500 level but very good ... just to the first base side of home plate in the third row. I enjoyed being in those seats as the row right behind was where I shared season tickets for the first the first 6 years of the Dome's opening.

Things did not start off well as the Jays went quickly down 2-0 before they came to bat. After the 5th, they were down 4-0. Then in the bottom of the 6th, current home run leader Jose Bautista came to the plate with 2 men on base and slammed a drive into the left field seats. The Jays were back in it.

In the 7th, the Jays tied the score and then Escobar came up with a 2 run homer to put the Jays into the lead. In the 8th, to every Jays fans delight, Bautista did it one more time, burying another shot into the left field stands.

With a 3 run lead in the 9th, the inning was more interesting and nervous than we would have like but in the end the Jays had a 7-5 victory.

It was a great day for a game, with the sun shining and the temperature hitting 25C but felling like 29C.

Ken and I both came home with colour on our arms and faces, taking away some of that winter whiteness.

Then we BBQed sirloin burgers before Ken headed home. We had a great visit and a great day at the ball yard. With a Jays' victory and Jays' hero Bautista cranking 2 home runs, it had to be an enjoyable day at the old ball game!

Bautista in action in the 1rst. This was an infield single. 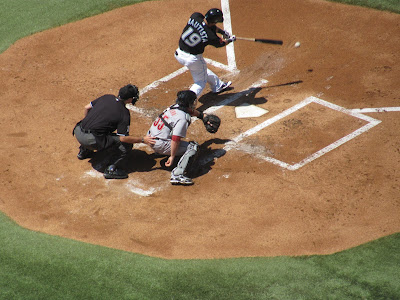 So why did I take this picture of Carlos Lee from the Houston Astros? He is on my fantasy team the Rumrunners and in my line-up this week to to an injury to my first baseman Ike Davis. I think he was showing off for me as he had a single, a double (shown here) a stolen base and scored 2 runs. 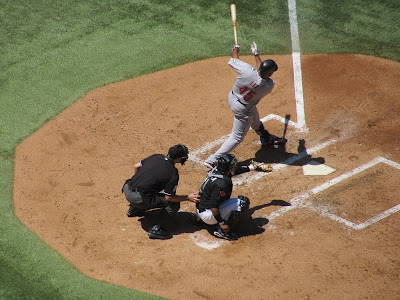 It seems that every Jays fan loves part time player John MacDonald AKA Johnny Mac. Here he slammed a long loud out with the ball being caught on the warning track. 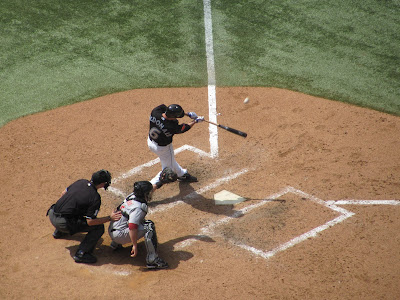