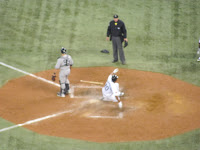 These are the types of games a fan loves to go to. Playing against the Evil Empire called the New York Yankees, an ex-Blue jay who abandoned Toronto to go to the hated Yankees pitching, and a dramatic 9th inning comeback and 10th inning win.

The Jays were losing 5-3 going into the bottom of the 9th. With one out and Escobar standing on third, home run hero Bautista came to the plate with one out. Fans groaned when he struck out then erupted as the pitch bounced by the catcher. Escobar was safe at home and Bautista stood at first.

It gets better. Nothing is more exciting in baseball than a squeeze at the plat 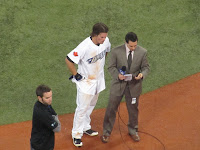 With fan favorite John McDonald (know as Johnny Mac) at the plate and Bautista standing at third, Bautista broke for the plate as the pitcher Rivera delivered the pitch. Ever reliable Johnny Mac laid down a perfect bunt, and the relay to the plate was too late.

The Jays had tied it!

Then in the bottom of the 10th, Edwin Encarnacion singled then watched as the next two batters had long deep outs.

Up to the bat strode Travis Snider, he with the meager .140 average. The season is young and what has happened so far in the season does not matter. Only this at bat matters. 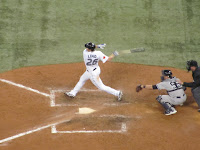 And he made it matter.

A long drive to the gap and Encarnacion took off with no intention of stopping. Lind had a double, Encarnacion scored from first (pictured top left) and the Jays had a huge come from behind victory.

A Bautista home run. A squeeze play to tie in the bottom of the ninth. A walk off double in extra innings. All against the Yankees.

Kevin (forefront), Alfred waves from behind while Craig to his right concentrates on the field 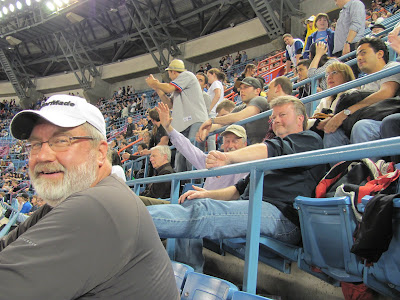 I took this one for Teena who loved Eric Hinske when he was with the Jays. Some fans still remember. 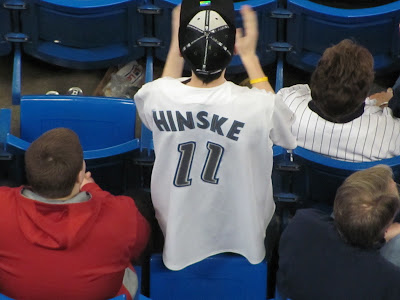 It was an exciting game to watch on TV too!