Historic Plaques of Toronto - The Great Fire of 1904

It seems that many large cities back in the late 1800s/early 1900s experienced a great fire of some sort. No surprise really as most buildings had wood construction and were heated by fire.

Toronto was no exception.

On this date in 1904, a fire started which destroyed a major part of Toronto's downtown area.

Yesterday, when I discovered it was the anniversary date of that great fire, I decided to hunt down the plaque which commemorated that day. 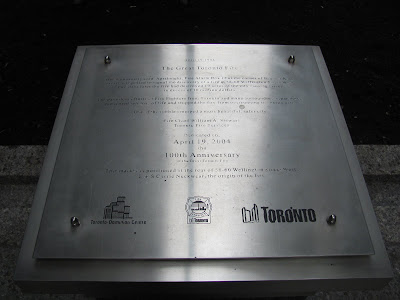 The fire of 1904 was commemorated on its 100th anniversary with a plaque in the TD Centre by the corner of Wellington and Bay, just to the west of the Ernst and Young Tower, by City of Toronto, Toronto Fire Services and the Toronto-Dominion Centre.

This was a hard plaque to take a picture of but it reads:

"On an unusually cold April night, Fire Alarm Box 12 at the corner of Bay and King Streets was pulled to signal the discovery of a fire at 58-60 Wellington Street West. Two days later the fire had destroyed 7.7 ha of the city causing losses in excess of 10 million dollars. The dauntless efforts of Fire Fighters from Toronto and many surrounding departments prevented any loss of life and stopped the fire from overrunning the entire city. Out of the rubble emerged a more beautiful, safer city." 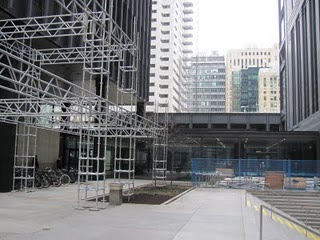 And from the Archives of Ontario:


"The weather in Toronto on the evening of 19 April, 1904, was cold and blustery. The air temperature was below freezing (24° F) and snow flurries were occurring accompanied by strong winds from the northwest at 30mph. All was quiet in the heart of Toronto's mercantile area. Few people were on the streets as almost all the buildings in the area had been closed since 6 p.m. At 8:04 p.m., a police constable patrolling his beat in the area saw flames shooting skyward from the elevator shaft of the Currie Building, 58 Wellington St. and immediately turned in an alarm. Before the resulting conflagration was extinguished, it would destroy approximately 100 buildings, causing a property loss of $10,350,000."
Toronto Fire of 1904
G. W. ShorterFire Study No. 13
Division of Building Research
National Research Council
Archives of Ontario, Pamph 1964 #55 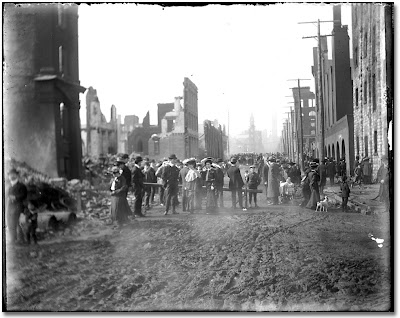 The only fatality of the fire happened of a few weeks later when John Croft was killed on May 4th while assisting a dynamite crew during a blast while clearing the rubble. A plaque to him is on Croft St, just north of College, west of Bathurst. 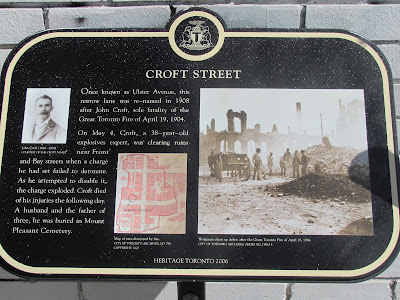