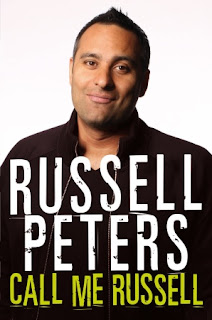 This candid, first-person memoir chronicles Russell's life from his humble beginnings in suburbia as a scrawny, brown, bullied kid with ADD all the way to his remarkable rise as one of the world's top-earning comics. This is a shockingly honest book filled with poignant memories of his family, his life and his career. Call Me Russell is a deeply inspirational story for aspiring artists of any culture about having hope, working hard and dreaming big.

As I have said before, I usually do not like autobiographies very much, but now have read two in a row that I have really enjoyed.

I am a big fan of Russell Peters who is a stand-up comedian from Brampton, which is just outside of Toronto. His stuff is hilarious on TV and even better live. Teena and I were at a sold out show over over 17,000 people at the Air Canada Centre last year.

To my delight, the book is very honestly written. I gained insight into his life, the inside of the the Canadian comedy industry, and the comedy industry, both on TV, in movies and the stand-up scene from around the world. It was a very easy read, enjoyable and fast moving.

I found him humble yet very proud of where he was from, where he is now and how he got there. He sums it up at the end, that in a very fickle industry all that he has accomplished was "through no fault of my own".

I found myself liking him more at the end of the book, than when I started, and I liked him going in. A book definitely worth the read.
Posted by Swordsman at 19:09

Haven't seen him live but I've caught him a few times on the tube and my 20-y.o. daughter is always pulling his stuff up on the internet ... she'd love this one — think I've found her bd gift this year, thanks!