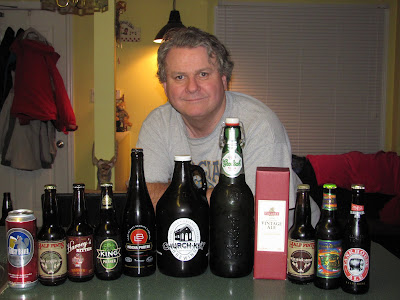 Since I decided to really start exploring beer, I have had a lot of variety of beer in our fridge. I must say that Teena is very patient working the groceries around the beer stock and has been firm when I feel we should throw out the milk in order to jam in another new beer that I have discovered.

In last year's Christmas fridge post, I said that "In 2010, one of my goals is to get a beer fridge for the back room so Teena does not have to work around getting all the shopping fitted into the fridge around my beer."

OK, that didn't happen. We redid the back room and cannot figure where a beer fridge might go. So instead we, meaning Teena, is still working around the beer.

This is the third year I have taken stock of the beer in the fridge at Christmas. Interesting to see all that I have to sample over the holidays.

Teena also has a Keiths IPA.

Sure looking forward to some sampling and posting during our vacation.

Happy Holidays!
Posted by Swordsman at 18:44

You look like a happy man in the pic. Enjoy the beer! You remind me of Joey regarding wanting to have another fridge. Joey said he would like to have one next to his side of the bed for food and pop.