Fencing at the Vet Capital Challenge 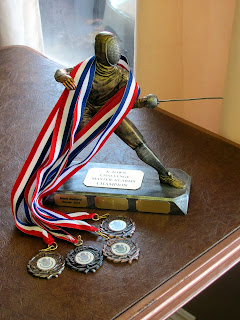 This is the Master at Arms trophy which is handed out after the three weapon tournament at the Vet Capital Challenge in Kingston.

Even though it counts towards National Veterans points, it is a very laid back and fun tournament. Between events, there is a potluck spread put out and even some wine or beer to sip on. Whomever does best at all three weapons, epee, sabre, and foil, is bestowed the trophy. Last spring it was won by Mark.

Some enter all three weapons but this time around, I did sabre and foil. Sabre was today, foil is tomorrow. My friend, Gaby, a foil fencer, decided to pick up an epee today, and although he did not finish well, looked in perfect form. He is on the right, in the picture to the right.

Thirteen were entered in the sabre event and I was quite confident going in. When the pools were done, I was 4-1 but tied with some others with the same record and stood fourth, which meant I would face mark in the direct elimination round (DE). Mark has beaten me quite a few times in the past as he has excellent distance, a great sense of timing and a different style of fencing that I am used to. I have figured Mark out, though, and have beaten him in the last five matches we have had ... or at least I had, 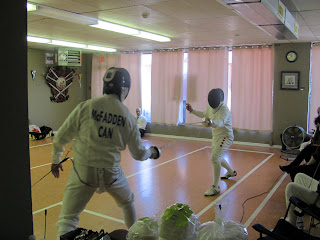 though, I had him figured out!

He was spot on today. When I made mistakes, he took advantage. When I attacked, he got that two inches out of range and with his long reach would clip my arm for the point. In the end, he had beat me soundly and had earned it. I ended the day with a fifth place finish. Good to know, though, that if you have to lose, you lose to the champ as Mark went on to take the gold in the event.

Tomorrow is foil, which I have great defence in and no attack. I have no expectations in this event and anything above last will be an accomplishment. Should be a fun morning.

Mark on the left, in the gold medal match showing the form that defeated me today. He can leap back and flick his blade onto your forearm. Below is a close-up of the hit. I felt this more than once today! 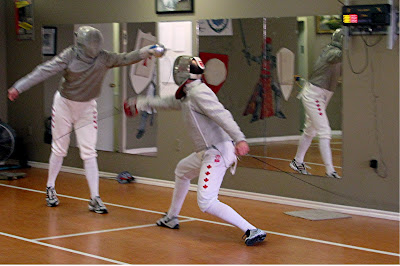 See! Notice how his blade is curled as he has just leaped out of range and caught his opponents wrist. 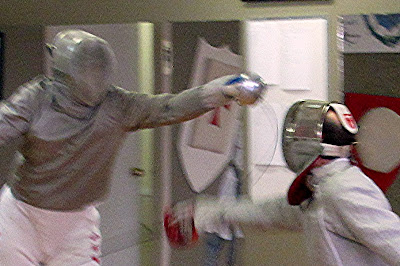 Hopefully you had fun.