A Gords Eye View of Toronto - The CHUM Sign 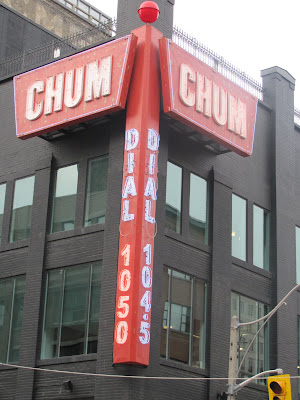 1050 CHUM was the radio station that my generation and I grew up with in Toronto. Rock's greatest hits of the day blasted from the radio, sometimes drowned out by my mom screaming, "Turn that damn noise down!"

All hits, all the time, and complete with the "Chum Chart" hitting every record store ranking Canada's top 50 songs (which could be bought on a "45" single back then). The chart was later changed to a top 30 listing.

On Yonge Street, just north of St Clair, stood the CHUM broadcast headquarters where for 50 years they operated. The heyday of CHUM AM radio died in the 80s but before that it was a music force in the city.

Mounted on the side of the building was the CHUM sign. Erected in 1959, it stood until 1986, when it was toppled by vandals who felt it interfered with their TV signal (most still had antennas at the time). It was repaired and then remounted.

In 2008, the building was sold to developers. Although there was a small campaign to save the building citing historical reasons, condos are going in its place. The building had no character and was just a square box, so really no loss.

The sign was safe, though, and in June 2009 found a new home at 250 Richmond St. on the NW corner of Duncan. The building is owned by CTVglobemedia, who now owns CHUM. I'm glad the sign survived as it is one of the fun pieces of Toronto history. 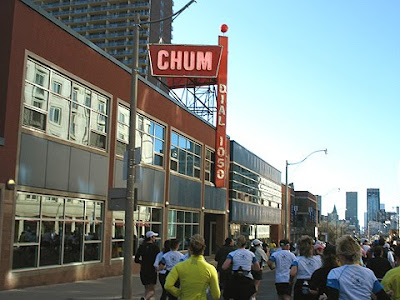 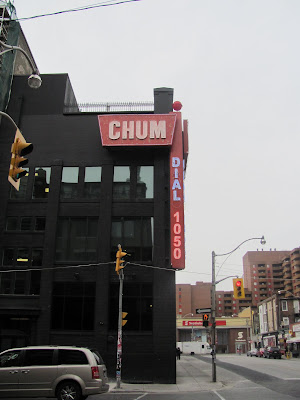 Looking north on Duncan from King St. There it is on the left. 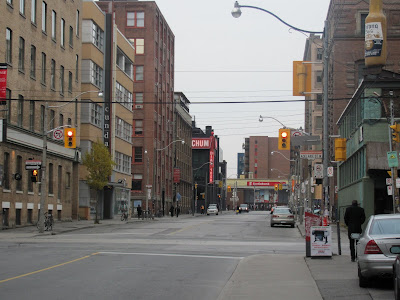 I was so much worried when the building was sold to developers and I absolutely didn't think they would preserve the CHUM sign - but here I go! Probably I shall put more trust into developers' judgements next time. The street wouldn't feel the same anymore without the sign and the memory of CHUM would slowly fade away.