Fencing at the Brock Open 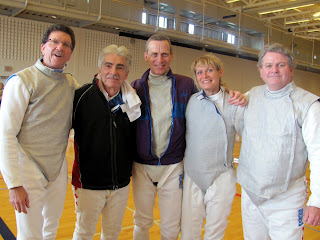 Sadly only three were entered in the Veteran Sabre event. My knee was twingy after fencing in the senior event so I pulled out of the vet's sabre and the event was cancelled. If six were entered and national points were on the line, I would have put another layer of wrapping on it and gone at it, but with only three fencers, no points and a maximum of four bouts, better to not take any chances.

Yesterday, when the pools were set for the Senior Mens Sabre, I had a look at my competition. Two I had never beaten before, three I did not recognize, and the last one looked familiar. I had fenced him maybe once or twice but couldn't remember how good he was. When I was down 3-0 to him, then I remembered!

I fenced well, losing my first match 5-4, one I figured I should have won, then proceeded to face the three I had never beaten before, with the usual results. I did win the last 2 to be 2-4 on the day.

Note to self: Eat better on fencing day. 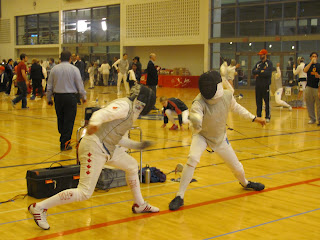 I had a good breakfast and came with pasta but found I had no fruit bars. I was not hungry at all, so just picked away at the pasta. I needed a good jolt of sugar though which wasn't available.

So I am in the direct elimination (DE) facing the 24th ranked fencer and fought him hard for the first half of the match. I lost a slight lead I had and at the break was down just 8-6. I took a drink and felt ready to go. Then after losing a point and scoring a point, I suddenly felt tired. I am not in the shape that I want to be but have a great reserve of energy. Not here. I was tired and fenced like it in the second half. In the end, I had lost 15-8.

Lesson learned. Always have my fruit bars available. First time I didn't have them.

I ended up 42 out of 61. I felt for the most part I fenced well, made the right corrections as I went, and never let my usual problem of pulling my arm back on the attack surface. I had the misfortune to be in a tough pool and am happy to have the result I did. Considering that I was eliminated by a fencer who won his next match and went on to finish in the top 16, I'm feeling good. 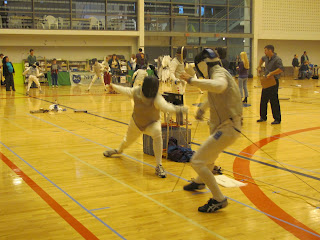 Today it was Vet Foil. Pictured at the top was the competitors from my club, Bladeworks. From right to left are Eli, Gaby, Simon, Deborah and me.

In the picture to the right, Gaby on the right and Simon unfortunately had to fence off to see who went to the medal round. The picture below is Simon defending an attack by Mark. Mark took home the bronze.

I rarely practice foil and is my fun weapon. I look to give my competitors a tough fight and today, even thought he score never indicated, did just that. I lost every match but there sure was sweat coming of my competition. I am pretty good with my distance and on defense so they had to work for the majority of their points.

In the end, I was last and that was where I expected to be. It was a fun weekend.

Time to ice up the arm, ice up the knee and ice up a rum and coke. I've earned it.
Posted by Swordsman at 17:42

hey thats the great post..
You have got great achievement...

All the best for the future achievement... :)