A Gord's Eye View of Toronto - The CN Tower

I thought about doing this a couple of years ago and putting my pictures of Toronto in an album called A Gord's Eye View of Toronto.

After a year or so of having forgotten the idea, I came up with it again this week, only with posting a picture a week on this blog with a picture from Toronto, which I think is the best city to live in on the planet.

The reason I started with this picture is that I work in this area downtown. At least once a week I see a tourist or someone with a camera taking this shot. So I thought I should too. Must be a good place to start. In fact. as I was taking this shot so was someone else.

This shot of the CN Tower is taken between the Sun Life building and Metro Hall. 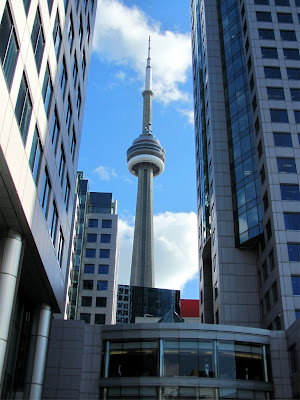