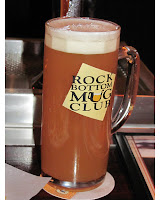 I was in Cincinnati this past weekend for a couple of fencing tournaments and was happy to find a micro-brewery just a couple of blocks away, Rock Bottom Brewery.

By the time my plane landed Thursday and I caught a shuttle to my hotel to unpack, I was starving and thirsty so headed right over. There was a good crowd already filling the place and I grabbed a spot at the bar.

I was surprised to find that this place is not a one off but is a chain of 35 restaurants owned by Rock Bottom Restaurants, Inc. of Colorado. The group also runs Old Chicago and the Chophouse Brewery. The original Rock Bottom Brewery opened in 1991 in Denver, CO. It grew quickly and in 1994 sold shares in the company and became a listed company on Wall Street. In 1994, the shares were bought back by the owners and the company delisted and became a private company. Now the corporation has over 100 Rock Bottom locations. 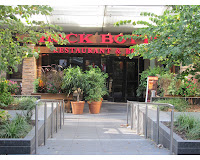 new place... I don't know why. They were delicious. The food was so good that I ended up eating supper there the next two nights. Last night was a South-Western Pasta which came with healthy sized pieces of chicken and shrimp. Tonight I was there with my friend, Vince. I had the pizza, excellent again, while he had the Double Rib Pork Chop, so big he could not finish. I would recommend the food there anytime.

The bartenders are always quick to offer a sample if a customer is unsure. I asked which was the hoppyist beer and was told it was their Crosley Field Pale Ale. As it was the night before competition, I had to behave so started with the White Tiger Wheat and had the Pale ale after.

Last night was also on the eve of a competition so I started with Tall Stack Ale, and again followed with the Crosley Field.

To night with Vince I stayed with the favorite, and had 4 (might have been 5) of the Crosley Field Pale Ales. No fencing tomorrow for me! Their pale ale has a pleasant hoppy nose and bite. It was darker in colour, their website describes it as caramel, with a delicious but not overpowering bitterness to it that stays long through the finish. 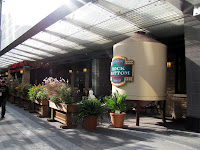 Definitely was the favorite of the 4 I tried.

If I had to come up with a complaint and I have to stretch to find one, it is that tonight there was a college football game on TV, Ohio State and Wisconsin and the baseball playoffs. The pub was packed. The fellow beside me and I asked that one of the three TVs over the bar be tuned to the ball game. Annie, the bartender, said no as all three had been reserved for the football game but we could watch the ball game on a TV over on the side wall. I don't think one TV being tuned to to the ballgame would have been a problem.

But it is the only complaint I had. The food, the beer and the staff were all great. If I see another Rock Bottom, I definitely would be heading in for a bite and a beer. 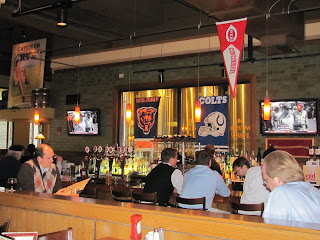 Artwork for some of their past brews 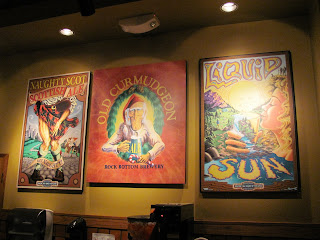 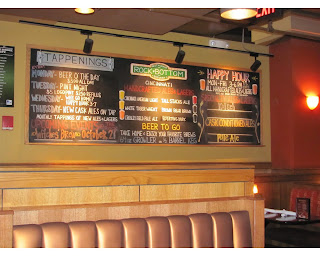 Toni was a great bartender, but a lousy photographer 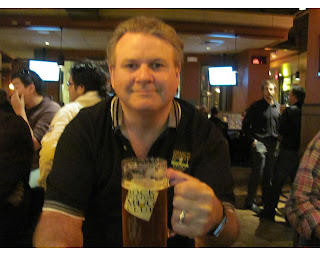 I found black and white cleaned up the image. 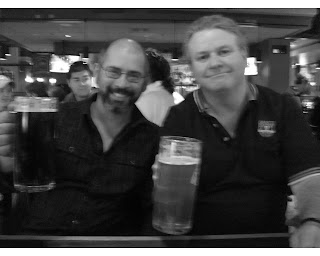