Fencing at the Cincinnati NAC - Day 2 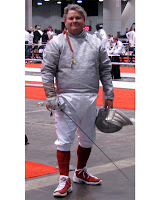 This afternoon was my second tournament of the weekend, the Veterans' Men's 40 and Older Sabre.

For some reason, I usually do better in this one than I do in the Vet 50-59. It doesn't matter whether I fence it the first or second day, I just do better.

My hope for this tournament was that I had corrected all my problems from last tournament.

I fenced much better but finished the poole with the same result as the day before, 2 wins and 3 losses. That had me ranked 27th in a field of 47. This meant that I would fence the 36th ranked fencer, Lauzon, who I fenced and beat the day before.

It was a tight tough match, with us going a point or two up on the each other and then seeing the lead evaporated. Then with a 7 all tie, in a match to 10, there were two bad calls against me and I lost 10-7. Some friends watching agreed that the calls were bad. The calls did not cost me the match. If I had built up a good lead instead of being tied, the calls would not have meant much. 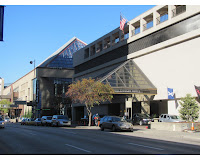 I did correct the issues from the day before, issues which I still need to concentrate on in practice. I kept my arm out threatening the attack, kept my footwork small, and for the most part worked my distance well. Still I felt rusty and look forward to getting back to regular practices as my knee held up very well.

I was staying at the Millennium, right across the road from the Duke Energy Center where the tournament was held. A walkway connect the two, so once my day was over, I could just drag my gear back to my room without changing.

Unfortunately the walk back was much earlier than I would have liked it to be.
Posted by Swordsman at 16:24