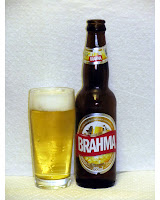 Last week, Teena and her sister were in Punta Cana in the Dominican Republic. Apparently the bars serve Presidente which is a beer made by the Dominican National brewery. In the fridge in their rooms were bottles of Brahma, which actually is a Brazilian beer. Teena brought me home the Brahma from her room.

I wondered why the resort did not support their national brewery but found the answer quickly. Brahma is a Brazilian beer but one that is brewed in the Dominican by AmBevDominicana and is cheaper than the Presidente.

Brahma has a version of this beer available in many countries around the world, including Canada. I have not had the Canadian version and wonder if the taste of the Dominican one be similar to our Canadian version.

Interesting note was that when Brahma was introduced to Canada, Teena and I were in Vancouver at that time and came upon a Brazilian festival on a closed off street. Many watched from outside and we decided to take a chance and try to get in. We walked up to the door, was handed a pass and in we went for free beer, food and dancing. It was the official launch of Brahma to Canada! It was a fabulous time.

Companhia Cervejaria Brahma, the brewery that originally created Brahma, was opened in 1888 by Joseph Villager. Eventually the company was merged with Anheuser–Busch InBev. According to Colonial Zone, the Brahma is made with the usual four ingredients plus corn which is not unusual for a big brewery beer as it is cheaper than malt. I'll bet Joseph did 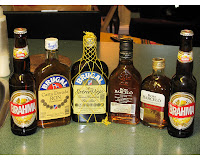 not use any corn in his. The stars in the logo were inspired by the sky the night that Brazil declared itself a republic back on November 15, 1889.

The beer pours a very light yellow colour with a white head that disappeared quickly. The is a slight hoppiness in the aroma. It is mildly flavoured and a little sweet. This is a beer made to appeal to the everyday beer drinker.

Thanks, Teena, for bringing these home for me!
Posted by Swordsman at 14:21