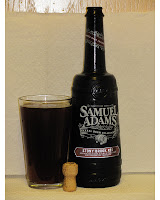 One of the very first things I did when I was in Boston was to jump onto the Orange line and make the trip to the Samuel Adams Brewery. I am a big fan of their Boston lager so was looking forward to this for weeks. It was a rainy Friday afternoon, but did not seem to dampen the crowds, and yes, there were many there to take the tour. The tour is free, but they suggest a donation to their charity which supports local organizations, so hey, not a problem.

Actually known as the Boston Beer Company, the brewery is 26 years old, being opened in 1984 by Jim Koch and is located in a century old set of buildings. It's first beer, Samuel Adams Boston Lager, came from an old family recipe made in 1960 by one of his descendants, Louis Koch who ran a brewery in St Louis. Three months after it's debut, it won the Great American Beer Festival, where 93 national and regional 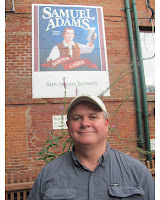 Named after one of America's founding fathers, who participated in the American revolution and Boston Tea party, and apparently was a brewer himself, Samuel Adams became a publicly listed company on the NYSE under the symbol SAM in 1995. Yet it still considered a craft beer brewery as under the rules for American Craft Brewer it
"has an annual production of beer exceeds 2 million barrels and the brewery was founded as a Craft Brewer and continues to satisfy the other Craft Brewer defining criteria and less than 25% of the Craft Brewery is owned or controlled (or equivalent economic interest) by an alcoholic beverage industry member who is not themselves a Craft Brewer." 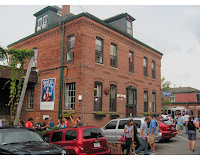 The tour was fun. Mike was our tour guide and was quite animated and full of humour. We were shown the brewery and the process and got to sample different types of barley, and crushed hops in our hands to let loose the aroma. Then cam my favorite part, the sampling where we tasted 4 different styles of Samuel Adams beers.

They have a special barrel aged beer which they brew only a few times a years, which they call their Barrel Room Collection. They use a special yeast for this beer, one which is supposed to be close to the wild yeasts of Belgium. After brewing and adding this special yeast, they ferment the beer in oak barrels which were originally used for making brandy, then imported to the brewery. 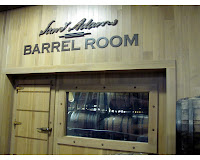 unique brew defies traditional beer style definition. The rich, malty brew combines notes of tart fruit from the yeast with a toasty oak character from the barrel aging. The long dry finish is almost wine-like. This is a beer that is satisfying on its own and also pairs well with many foods such as braised or roasted meats, beef stews and strong salty cheeses"

OK. Time for me to pour and try it for myself.

The beer does pour a deep red colour. I thought I could sense the slight smell of brandy but think I was smelling just the alcohol, as this beer is a 9% APV brew. Something was familiar in the aroma. Teena unlocked the mystery. It smelled like many home brews her first husband had made. That was it. I had a few friends that tried to make their own beer at home and yes, this reminded me of them. 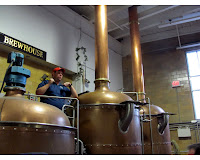 There was no head, nor any lacings along the inside of the glass.

The beer has a harsh taste and is very sour. I was not at all impressed and is not a beer which I would recommend.

I love their Boston lager and really enjoyed all the beers on the tour, especially the Kogen, which is only available if taking the brewery tour.

All in all I had a great time at the brewery. Next time I would not be leaving with this beer though.
Posted by Swordsman at 14:33