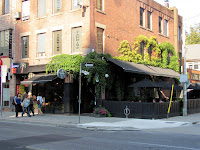 I had never been to Bar Volo before, but had heard many good things about it.

It is a major stopping place for the beer geeks of Ontario and a place I had wanted to visit since the first time I heard of it.

Last year they held their first IPA Cask challenge. 18 breweries participated in that one with Mike Duggan #9 IPA winning out over Durhams Hop Addict in the final.

This year they are holding the second annual Ontario Cask I.P.A challenge ... "This year will feature 16 India Pale Ales on cask, with three rounds, all blindly tasted. The top score from each beer pairing will advance to the next round. All participating beers will be disclosed as brewers submit their beers."

The finals are going on now all week long during Toronto Beer Week with My Bitterer Wife from Great Lakes Brewery going against Smashbomb IPA from Flying Monkeys Brewery. You get a ballot and a half pint of each for just $7. Last night apparently they sold out. Of course, Monday night is $4 pint night so they are always jammed Monday nights.

The bar is very quaint and nicely laid out. A deli fridge is by the entrance showcasing some of their better bottled beer and many beers are behind the bar on tap. There are always a good selection of cask ales. No big breweries here. It's a beer lovers dream. My only complaint would be that there are no seats at the bar, where I like to sit. The patio is quite nice along the south side of the building. It is a good size, airy and well-serviced.

I like that when they serve a beer, they also bring you an ice water without asking. I first went to the cask challenge, which in this case was not a blind tasting. The Flying Monkeys Smashbomb had roasted 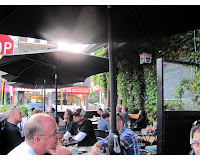 malts giving it a darker colour with a slightly bitter malt taste to go with the hop bitterness. My Bitterer Wife from Great Lakes was more of a yellow colour and allowed the hop bitterness to overcome the hops.

Both were very nice.

After doing the challenge, I had a pint of Sgt Major IPA, a nice bitter IPA from Scotch Irish brewing which is just outside of Ottawa and a personal favorite of mine in bottle or on tap.

I would enjoy going back to Bar Volo again. The menu looked good and would be worth a try. I do know that I will never be able to be in the area without stopping in for at least one pint. It's definitely on my favorites list. 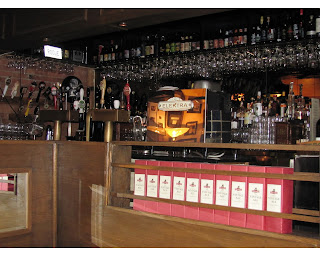 My Bitterer Wife received my vote 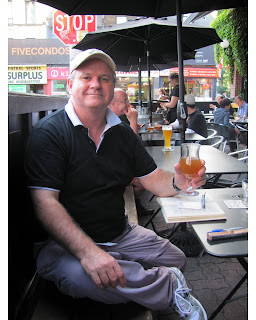