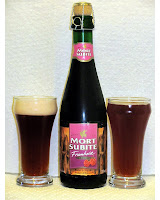 So what is Lambic beer?

According to the Beerbistro in Toronto it is ... "A spontaneously-fermented style of wheat beer called lambic forms the base for this popular line of sweetened, perfumey fruit beers. The unique raspberry flavour of Mort Subite has converted scores of people here at the restaurant who swore they'd never touch a beer, and continues to please and surprise on a daily basis."

I had only had it once before back in December and really enjoyed it.

Lambic beer is produced the same way as beer has been made for thousands of years, where all the ingredients are combined, placed in a vat for a day or two to pick up all the airborne yeasts and then left to work their magic. It wasn't until the mid 1800s when it was discovered that the magic came from something called yeast.

There are only 6 or 7 breweries left who still use this process.

Morte Subite is one of them. Mort Subite is the brand name for a number of lambic beers brewed by the Belgian brewery Keersmaeker (pictured bottom left) which take their name from a café in Brussels, A La Mort Subite (pictured to the right)

The last time I tried Lambic beers, I found the flavour "explosive". Would I find it the same this time. Teena was to try some. What would she think?

The beer pours with an quick forming head. The reason for the two different heads in the picture, is the one with the head I poured trying for a head which had to be tamed and the other I went too far the other way to control the head.

The beer has a reddish tinge to it, no doubt due to the raspberry (love to state the obvious). When sipped, there are lots of fabulous lacings which remain along the inside of the glass. In fact the lacings were there a half hour after we had finished. Quality is in this beer. 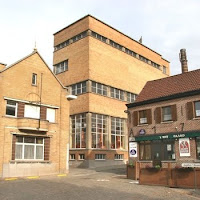 Raspberry is definitely in the aroma and very predominate in the taste. The beer starts with raspberry and ends with raspberry. It is a very refreshing beer, not not with the explosive flavour I remembered from previous lambics. I enjoyed this beer but found it quite sweet. It would make an excellent desert beer or a replacement for a rose sparkling wine.

And Teena's thoughts ... "I liked it. It would have been nice to have a couple all to myself. The raspberry taste is there but I didn't find it too sweet. I liked it better than Amsterdam's raspberry beer."

Obviously there will be more coming into our fridge. As much as this is a beer which I find too sweet for me, it sure is a very very quality beer.
Posted by Swordsman at 19:42