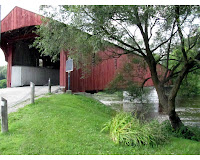 Teena and I went for a drive north of Waterloo.

We were on our way from St Jacobs to Elora, when we saw a small sign on a pole which said Covered Bridge, with an arrow. Intrigued we turned and followed the road for about a little more than 5 minutes, where another small sign told us to turn right. Another 5- 8 minutes later, another sign said to turn right again. Hopefully it was not a wild goose chase.

We came across this postcard scene. An old 198 foot red wooden covered bridge crossing the Grand River. The West Montrose covered bridge was built in 1880. It has stood for 130 years and is the last remaining covered bridge in Ontario. I always thought covered bridges were built to provide shelter in a storm for travelers but found that a regular wooden bridge would only last 10 to 15 years but if you built a roof over it, the floor timbers are protected and can last indefinitely.

The bridge was built in 1881 and underwent major repairs in 1999. Light traffic is still crossing the bridge daily and many horse and buggies cross on Sundays. The bridge is often referred to as "The Kissing Bridge" because it is enclosed and the soft light provides a feeling of intimacy for the romantic.

It was a great find for us. 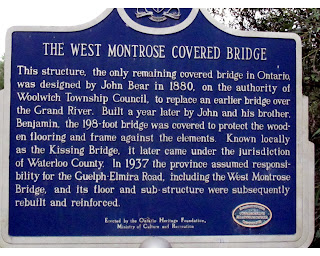 The area has many Mennonites. 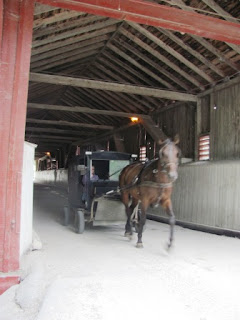 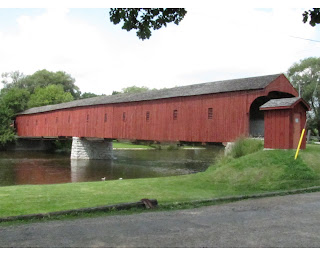 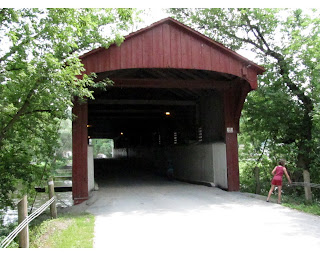 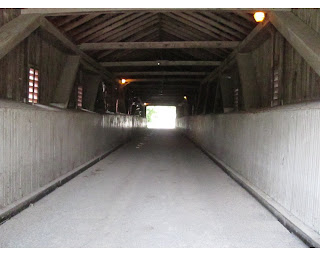 It was a cool find!