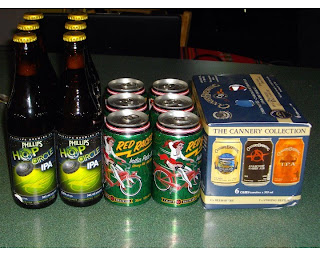 Teena was in Vancouver last week for both business and pleasure and she made sure she brought back some pleasure for me.

It came in the form of BC craft beer ... 18 of them. Apparently there was some repacking to be done at the airport so her suitcase wouldn't be overweight.

So for my sipping pleasure I now have in my fridge:
Can hardly wait! Bet you can't guess what's coming up in the near future on the Beer of the Week?!

Thanks, Honey! My wife rocks!
Posted by Swordsman at 06:18