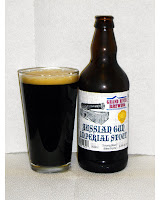 Back in April, I was fencing in Waterloo. The plan was to head south of the highway on the way home and hit Grand River Brewing. Problem was we were delayed in leaving due to myself and my friend fencing to the end of our respective tournaments and taking the gold. It also took time to do that so we didn't have time to get to the brewery before it closed.

I was happy to see that Grand River's latest seasonal, their Russian Gun Imperial Stout, is being stocked at the LCBO and quickly grabbed a couple.

So what is an Imperial stout?

Catherine II, also know as Catherine the Great, ruled as Empress of Russia back in the late 1700s. Seems that she also had a fondness for English stout and and would have it shipped to her palace from England. To survive the long harsh trip through sub zero temperatures, the stout had to be brewed with a higher than usual alcohol content to avoid freezing during the trip. After all, Catherine wanted her stout to drink, not to have as a frozen stout slushy.

Grand River Brewing is located in a historic old building in Cambridge, which for a hundred years was the Galt Knife Company. Bob Hanenberg, the owner, opened the doors of the building in June 2007, in its new incarnation as Grand River Brewing. The brewery is spoke of highly on beer geek websites such as The Bar Towel.

I like people with a sense of humour and Bob Hanenberg seems to have one. Listed in employee profiles is Frankie, shown below. His job description: "We welcome Frankie as our brewery dog and the newest member of the Grand River Brewing staff. He was adopted from a local family who could no longer give him a good home. He is roughly six years old and a mixed breed dog. He is currently looking after notifying us of customers in the store but will be moving up to be in charge of our complaints department before the end of the year. "

Brewer and dog lover. Haven't met him, but already I like Bob.

Russian Gun pours a dark black colour, with a brown head. I was quite surprised with the taste. It has a pronou 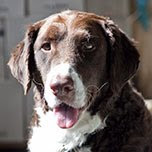 nced coffee bite to it from the roasted malt, which is very nice, and just a little hint of chocolate. That's not the surprise. The surprise is that with such a high alcohol content, I could not taste the alcohol, which usually happens with high alcohol brews. I think that would have upset the taste of this stout if it had. Instead this ends up being a very pleasing stout to drink.

Just don't want to be drinking too many of these in one sitting.

I am looking forward to when fencing season starts again and making a detour south of the 401 to stop in to Grand River for a visit.
Posted by Swordsman at 16:00