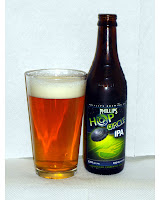 A couple of weeks ago, Teena was in Vancouver and brought me back an excellent selection of BC beers. Among them was a cleverly named ale called Hop Circle IPA by Phillips Brewery located in Victoria, BC, or as they say on their website, "in a little brewery at the bottom of a mid sized island on the left side of a very large country".

Owner Matt Phillips did not start this brewery in the traditional way of bank loans. He would have liked to but they all said no! So in 2001, after years of working for other breweries, he applied for every credit card he could find, maxed them all out, bought a some equipment and started brewing his very own beer. In August of that year, he rolled out his first three brands and was in business.

He was a one man operation, working out of his brewery/apartment located above a metal shop. In 2003, he bought a 1985 milk-truck style van, spray painted it blue and used it for deliveries. The next year he found himself successful enough to actually hire on 2 full-time employees. The truck and old facility is pictured to the right. 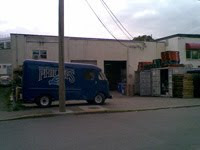 In 2006, all the work paid off as Phillips Brewery was named BC Brewery of the Year by the BC chapter of CAMRA (Campaign for Real Ale). Other awards followed including 1 Gold, 2 Silvers and a Bronze for his beers at the Canadian Brewing Awards. The reputation grew for Phillips and in 2008, he moved into a large shiny new facility, pictured down to the left.

Only 27 years old, with no banks willing to fund him, he took a huge chance when he started up but now it seems to have paid off

It pours an amber colour with a nice white head which lasts. As the glass was drained, nice lacings were left along the side. Flowery hop aromas tells me this must have been dry hopped at the end. There is a slig 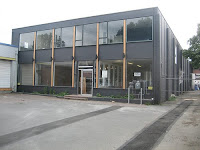 ht citrus fragrance to it which surprised me.

When I first sipped it, I first found it a little watery, which surprised me for a 6.5% APV ale. Then the flavours kick in and it becomes a nice tasting beer. The bitterness starts slow then takes over the ale. The finish, surprisingly, is not long. I found this in both bottles which I tried.

This is a very good beer. I would enjoy trying this on cask or on tap. Also, I would like to get hold of some of their other brands, especially the Amnesiac Double IPA and the Longboat Chocolate Porter.