From Beer to There - American Style Beer 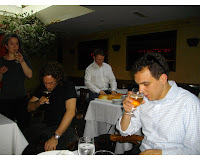 Tonight was week 5 of our From Beer to There beer course.

This week we met at The Rhino for a session on American-style beers, put on Harbourfront Centre and taught by Mirella Amato from Beerology

We learned about the large American breweries and their takeover of the marketplace with mainstream lagers, but the main focus was the American craft beer industry. The first North American craft brewery opened in B.C. in 1982. Many soon followed. In the U.S., there are now more than 1500 craft brewers and I have become a fan.

I never knew what a cream ale was but Mirella explained the beer and the concept of it to us as we sampled one made by an Ontario brewer. Lagers take longer to make so more storage is required and more time needed before it goes to market. So small breweries will make an ale and tweak the process so it ends up close to a mainstream lager. I forgot to write d 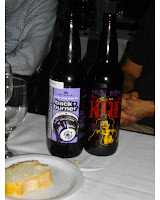 own the name of the beer we tried. I have to start taking better notes but as I found this beer bland which a touch of sourness and really didn't like it, it is probably for the better.

We also had a post prohibition style lager, Mill Street Organic, which is Ontario's first certified organic beer. I love many Mill Street products. Not this one though.

Then came the three incredible beers. The first was a Rouge Brutal Bitter which I have written about before. With a name like that, you would expect a brutal smack of hops in the taste and finish but the hops are very well balanced with the malt, with a rather carmel-like taste coming from the style malt they use and ends up to be a very nicely balanced brew.

Next up was an 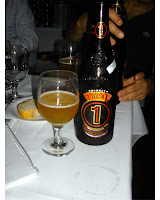 Imperial Barley Wine called Back Burner from one of my favorite U.S. brewers, Southern Tier. This was a big and bold complex beer. I could smell and taste chocolate, then carmel and where some in the class did not like it, the taste of alcohol. This would be one to sip on a cold winter night by the fire.

Finally came a new release from Brooklyn Brewery called Brooklyn Local 1, which they class as an unfiltered golden ale. They use regular yeast and finish with champagne yeast so the beer is very carbonated. It was light, champagne-like in taste with an earthiness to it. It was an excellent and very different style beer. I like it so much that the next night I took Teena back to the Rhino, which is not far away for us, to have a bottle ourselves.

It was another very enjoyable class. Only one more to go. I'll be sad when this class is over but we are discussing having a "homework" week. 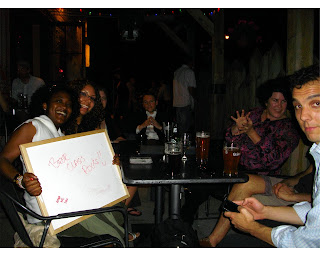 Teena, the next day on the Rhino patio showing off the Local 1 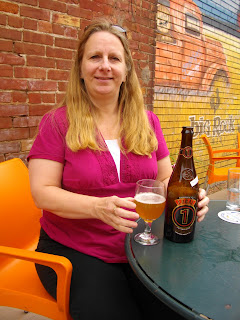