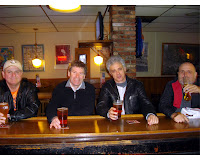 This past weekend Rick, Malcolm, Sox and I headed down to Buffalo for some baseball, beer and ... bingo!?

We left on Friday afternoon to beat traffic and get checked into the Adam Marks hotel before the rest of the weekend crowd. 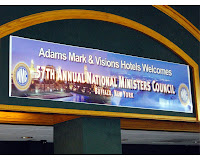 , plus the Lions Club was holding voting rallies for some of their hopefuls running for office.

Rick is shown in the lobby holding an information sheet for Benjamin Santos, who had a big presence in our hotel. Rick and I were unsure whether we would vote for him as our 2nd GVD unless he had some good answers for us. Alas, beer and baseball got in the way and we never had a chance to meet and grill him. 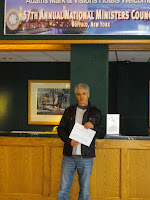 Lions Club and their election, and the hotel full of bible carrying deacons and ministers, it was easy to see that we would be the rowdiest in the place by default!

Over the weekend, we hit a number of bars, a brewpub, a game and a half of Buffalo Bison AAA baseball (it was too cold Friday night to sit through the whole game so we bailed on the ball and found a big screen to watch game 7 of the hockey game) and played some bingo ... more on that in the post about the ball game.

It was a great weekend. I love weekends away with the boys!

Malcolm, Rick and Sox race from the Bijou Grille after supper heading for our next destination. 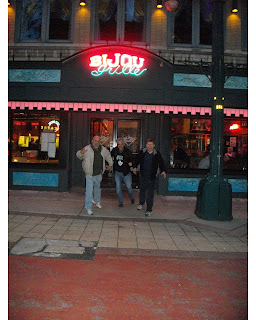