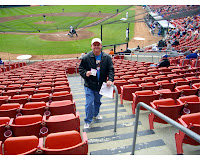 Today Rick, Malcolm, Sox and I hit Coca Cola Field to watch the Buffalo Bisons take on the Norfolk Tides.

Buffalo currently is in a battle for first place with Syracuse and Scranton in their division and this was a must win.

At the same time, as part of a promotion, was Baseball Bingo.

Every fan received a punch out bingo card and a set of rules.

Here's how it worked. When Buffalo was up to bat, what a player did at the plate determined the bingo number called. For instance, if their first baseman hit a single, it was I-23, a home run for the third baseman would be B-15. The one downfall of the game was strikeouts and gr 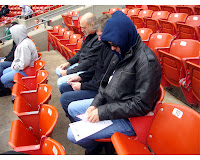 oundouts for the home team Bisons also counted for a number. A center fielder strike out was I-18 and a catcher fly out would be G-54.

Rick had a great idea to improve the promotion. The bingo game would be played for each team being at bat. Only good things for the Bisons would create a number, such as hits and stolen bases when they were up and outs when the visiting team was at bat.

When we came in, I was the only one who got a card. Seeing this, Rick ran back to get a card of his own and ended up with a dozen. So three of us were playing a single card and Rick, pictured hood up sorting 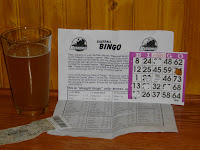 through his cards, had ten. The result ... none of us won. They had their 10 winners partway through the bottom of the 6th.

The ball game itself was good. Buffalo won 4-0, with Misch, their starting pitcher, going the distance and throwing a 4 hitter. Hessman, their third baseman, hit a towering home run and made a sensational catch on a line drive grounder and completed a double play.

You can't beat the price of Triple A baseball. We paid $11 for seats 2 rows behind the catcher. Imagine what that would cost for a major league seat?

All in all a great day at the ballpark. 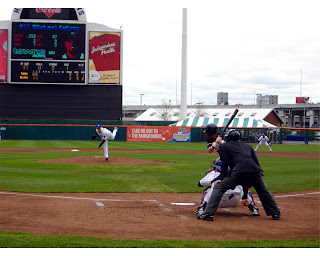 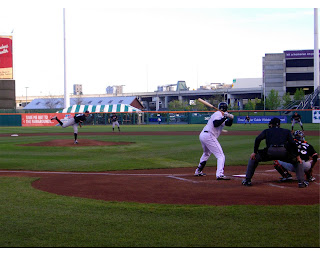 We were so close to everything 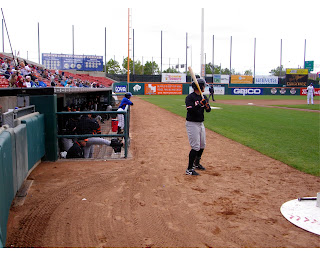