From Beer to There - Food Pairing 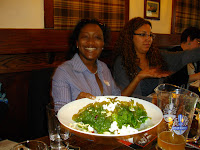 Thursday night was the second session of the "From Beer to There" course put on by Harbourfront Centre and taught by Mirella Amato of Beerology.

It was held at The Twisted Kilt on Yonge Street by Davisville. The subject? Food Pairing.

I enjoy food. I enjoy beer. No brainer that I should enjoy this class.

Many people at work thought it odd to pair food with beer. After all it's something done with wine. "What's the big deal?" said one co-worker, "You order a beer, then you order food, drink the beer and eat the food. What's so hard about that?"

If done wrong, certain foods can kill the taste of certain beers.

Here are the 2 basic rules: 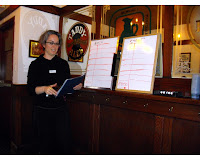 2- Match the alcohol percentage to the weight of the dish. Heaver dishes should be paired with bolder beers and delicate dishes with lighter beers.

We also dealt with some helpful hints such as how hops stand up well to spice. There was much more but you would need to take the class.

Then came the actual tastings. My favorite part!

First were Fish Cakes paired with Paulaner Lager. So far the theories we learned were right as the the fish cakes tasted great and the beer held its taste.

Next was an excellent spinach salad with Blanche de Chambly. I never was a fan of wheat beers but am starting to change. This beer was filled with flavours of spice and citrus, a subtle sourness and a clean finish. Again it worked very well with the salad.

Mirella then played a bit of a game. Out came a fully dressed plate of nachos and a ploughman's lunch of cheese, pickles, bread and apples. With them came a Wellington Dark Ale and a Black Oak Pale Ale. Which goe 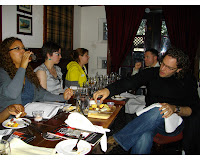 s with which the best?

To test a theory, I had saved some of my Blanche de Chambly which I tried after a taste of the nachos. The heaviness of the seasoned meat just killed the flavour in that wonderful wheat beer. Might as well have had water. Point proven.

Finally it was a Fruli Strawberry beer and a brownie. Excellent way to end a meal! 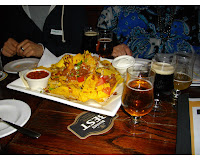 gs, something I will put to use in the future.

I would recommend the Twisted Kilt to anyone looking for a place with a great selection of beer and excellent food. According to Mirella, they have the best curry in the city. I'm not a curry fan but Teena is so we'll be up there again to check it out.

Thursday nights are something I look forward to as this is a fabulous course. Mirella is an excellent teacher.

I can't wait to try to curried chicken there!