In the Rain - The Beer Makes History Better Tour

Saturday Teena and I braved the rain and the wind and headed off to the Tour Guys' history walk of Toronto they called the Beer Makes History Better Tour. Jason ( behind the glass to the left) was the tour guide and quite knowledgeable about the city.

We started off at outside the Hockey Hall of Fame where Jason explained what we would be seeing, the pubs we would be visiting and the history of the corner where we stood, including pictures from more than a hundred years ago.

From there, the seven of us were led down to the corner of Front and Church where we heard about how cholera affected the populatio

n and the beginnings the of Gooderham and Worts empire. Their former head office is the famed Flat Iron building on the corner, one of my favorite Toronto buildings, which we also heard about, before heading into C'est What for a nice pint of craft beer. Mine was a very enjoyable Durham Hop Bomb from the cask. While we sipped, Jason explained the old Sunday blue laws of staunchly conservative Ontario.

Then it was off to St James Cathedral. Built in 1873, it is a wonderful piece of architecture inside and out and full of history. Jason was quite lively in his story telling of the church, its history and surprisingly the class system of religion in early Toronto.

Then we made ou

r way to a pub called Betty's where I had my first taste of Barking Squirrel Lager, a nice tasting brew from Hop City in Barrie. After leaving, we swung by the south side of the Toronto Sun building where we stopped to view the huge block long mural, commissioned in 1993 to help celebrate Toronto's bicentennial.

We ended up at Mill Street Brewery, a very popular microbrewery and pub in the Historic Distillery District, where we learned about the brewery and had a chance to sample four different brews.

Despite the rain and cold, it was a very enjoyable tour, one I would definitely recommend to anyone, whether they live in Toronto or are visiting. Despite the uncooperative weather, we all had fun and Jason never lost his enthusiasm throughout.

The Tour Guys run other walking tours in the city and I'm sure that Teena and I will be trying them out.

Below are some pictures of St James Cathedral.

The beautiful stained glass windows behind the pulpit.

Jason with a story of a famous Toronto duel.
The victims gravestone is the brown one behind. 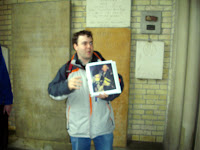 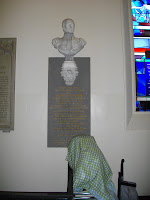 How many free drinks did you get?