Beer of The Week - Hogs Back Brewery T.E.A

The name on the bottle threw me when I first saw it on the shelf of the LCBO.

Tea I have heard of but wasn't ready for tea being in beer.

In this case, it's not T.E.A as in a nice pekoe breakfast tea. T.E.A is an acronym for Traditional English Ale.

This one is bottle conditioned which means there is yeast left in the bottle so the beer stays alive and keeps working and improving.

Mmmmm, my interest has heightened.

On the seal around the cap, the beer proudly displays CAMRA [The Campaign for Real Ale] (read more about it here) says this is REAL ALE. My interest is now peaked.

The brewery was founded by Tony Stanton-Precious who was toying with the idea of opening a brewery of his own when he stumbled upon a library book titled "How To Start Your Own Brewery". The message the book presented seemed to be that you needed a deal of capital, it was hard work and the divorce rate among start-ups was really high. Despite this advice, he decided to plod onward.

In 1989, Tony started brewing different recipes. For market research, he would offer a half pint of free beer for a written appraisal. A local pub agreed to help in this process.

He bought some 18th century barns close to home in Tongham, south west of London, to set up the brewery.

Finally in August 1992, he did his first commercial run with a 3,000 pint brew which he sent to a few local pubs.

Now the brewery brews three year round ales, seven seasonals and two Christmas Ales. The Traditional English Ale (TEA) is one of their year rounds offerings.

The beer is a cloudy brown colour, due to it being unfiltered and having active yeast still 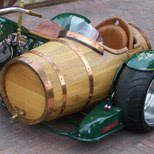 Even though it is only 4.2%, it is much lighter tasting than I had expected. There is very little of a hop bite to this bitter and no sweetness from the malt. I actually found very little to this beer. It's not a beer one could dislike and would likely appeal to the mainstream big brewery beer drinker.

For myself, it is not a beer which I would purchase again.
Posted by Swordsman at 19:18