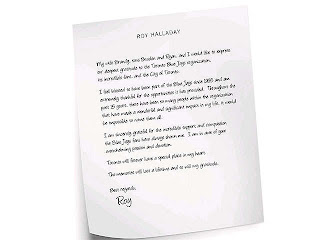 I am a baseball fan and, in particular, a Toronto Blue Jays fan.

Roy Halladay has been the anchor, heart and soul of the team and a favorite for a decade amongst the fans.

He is focused and driven on the mound. In my opinion, no pitcher has played with such consistent dominance over the past decade.

His career record says it all ... 148 wins, against only 76 losses, an ERA (Earned Run Average) and a WHIP (Walks and Hits per Innings Pitched) of only 1.20. The WHIP stat is considered excellent for a single season, let alone an entire career. All the numbers speak to a place in Cooperstown.

Sadly he was traded in the off-season to the Philadelphia Phillies, which may be the last piece in their puzzle to win the World Series, which would be their second in three years.

I haven't mentioned the class of the man. Everyone in Toronto knew he was a class act all the way, something which the fans in Philly will discover this year. Never did he badmouth the organization, a teammate or a single bad play on the field. He had asked for a trade to a 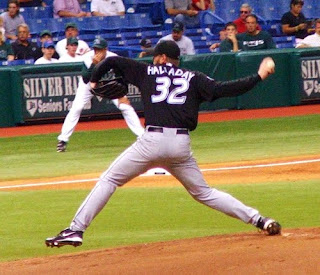 contender, got one, and in one final act of professionalism and class, took out a full page ad in today's Toronto Sun to thank the fans (pictured).

Toronto Blue Jays fans are going to miss Roy. I know I will. If the Jays aren't in contention in 2009, then I will throw my support for the Philadelphia Phillies, something that I have never done before.

Here is the transcript of Roy's ad:

My wife Brandy, sons Braden and Ryan, and I would like to express our deepest gratitude to the Toronto Blue Jays organization, its incredible fans, and the city of Toronto.

I feel blessed to have been part of the Blue Jays since 1995 and am extremely thankful for the opportunities it has provided. Throughout the past 15 years, there have been so many people within the organization that have made a wonderful and significant impact in my life, it would be impossible to name them all.

I am sincerely grateful for the incredible support and compassion the Blue Jays fans have shown me. I am in awe of your overwhelming passion and devotion.
Toronto will forever have a special place in my heart.

The memories will last a lifetime and so will my gratitude. 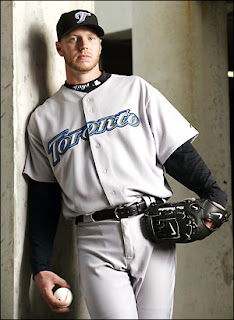