I have read about Lambic beer in the past and was excited to find that the Bier Markt carried this style of beer. So this week instead of writing about one beer, I decided the Beer of the Week should be about one style of beer, the Lambic.

So what is Lambic beer and why am I excited?

The book I am reading, Beer (Eyewitness Companions), says that "Ancient brewers must have stumbled across fermentation by happy accident." Grain which had become wet during storage would have released starch and sugars. The unseen and, at the time unknown natural yeast that floats through the air, would have transformed this substance into a very primitive beer. That is a happy accident!

We now call this "spontaneous fermentation".

For many centuries, this was the way beer was produced. Beer makers prepared a primitive "wort" and would let it sit and magically turn into beer. In fact, it was not 'til the mid 1800s that it was discovered that

yeast was the necessary agent that transformed wet grain into beer. Now brewers had more control over the brewing process, could make larger volumes of beer quicker, and the old process was nearly forgotten.

There are brewers in Belgium that still produce beer in this same ancient way by using "spontaneous fermentation". The wort is prepared and left to sit in shallow cooling trays called "cool ships", rooms where the windows are left open to invite the airborne yeasts to enter and settle into their brew. The the brew is casked into barrels and left to ferment for up to three years. The beer produced by this method is called Lambic beer.

And the Michael Jackson's Beer Companion, states,"to sample Lambic is to encounter one of the world's most complex drinks: it is also to experience a taste of life half a millennium ago." 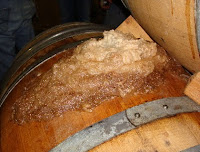 Most of the Lambic brewers age their casks for three years. They then mix some of the three year old or "old Lambic' with the "young Lambic' which has fermented for just a year to create what is called Gueuze.

And the Bier Markt has some!

First choice was the Mort Subite Gueuze. At $11.30 for a 375 ml bottle of 4.5% beer, it was costly but hopefully worth it. The original brewery was founded in 1686 but according to a book that I just purchased, The Beer Book, bought out in 1970 by De Keeremaeker Brewery. This recipe lives on.

It had a very strong malt flavour, not surprising as hops are only used to preserve the beer and not to add flavour. This beer was unfiltered but fairly clear, something I did not expect. There was a slight head but it did disappear fairly quickly.

I was surprised at the initial sweetness of this beer. Although, as far as I know, no apples were added, it quickly developed a strong apple cider taste. It was a very enjoyable beer, one I intend to have again and share with Teena.

After a nice glass of water, I then tried a St Louis Gueuze Lambic. Again I was surprised when the label said that it had "artificial" added ingredients in it, which were sugar and Acesulfume Potassium which is an artificial sweetener. I found this beer started off sour but the taste diminished quickly.

My final selection was "Lindemans Cuvee Rene Gueuze". The bar manager, Alex, had not yet tried this so I told him to grab a sampler glass for himself. He said he would pay back with sample but I have had so many from there and we were enjoying a nice chat about Lambics.

This may sound more like a bubble gum commercial but when I took a small initial sip, my mouth exploded in flavour. It had a very strong citrusy sourness to it which nicely faded but stayed with you. Alex too was surprised by the powerfulness of the flavour.

Even after drinking most of the glass, each taste gave the same wonderful explosion of flavour. After I was done and left, there was an enjoyable lingering taste in my mouth.

So my verdict on Lambic beers?

Very enjoyable but for the price, one to enjoy only on occasion. I loved the Mort Subite Gueuze and the Lindemans Cuvee Rene Gueuze. They are very refreshing and I would love to sip on one on the patio on a warm summer day, which I am sure I will next summer. I would pass of the inferior St Louis Gueuze Lambic.

It was a fun way to start my vacation, though!
Posted by Swordsman at 18:55